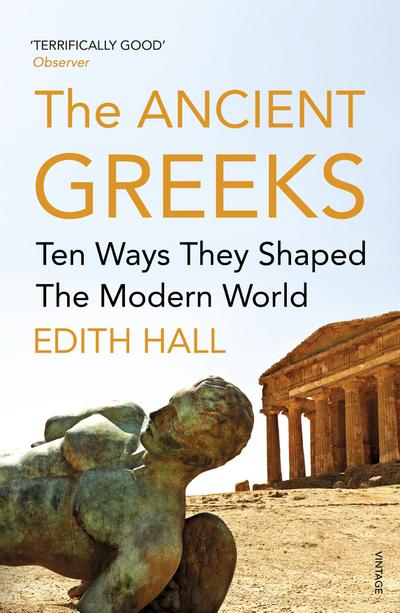 Edith Hall is one of Britain's foremost classicists, having held posts at the universities of Royal Holloway, Cambridge, Durham, Reading, and Oxford. In 2015 she was awarded the Erasmus Medal of the European Academy, given to a scholar whose works represent a significant contribution to European culture and scientific achievement. She is the first woman to win this award.

Hall regularly writes in the Times Literary Supplement, reviews theatre productions on radio, and has written and edited more than a dozen works on the ancient world, including Introducing the Ancient Greeks. She teaches at King's College London and lives in Gloucestershire.

They gave us democracy, philosophy, poetry, rational science, the joke. They built the Parthenon and the Library of Alexandria. But who were the ancient Greeks? And what was it that enabled them to achieve so much? This title offers a revelatory way of viewing this geographically scattered people, and more

They gave us democracy, philosophy, poetry, rational science, the joke. They built the Parthenon and the Library of Alexandria. They wrote the timeless myths of Odysseus and Oedipus, and the histories of Leonidas's three hundred Spartans and Alexander the Great.

But who were the ancient Greeks? And what was it that enabled them to achieve so much?

Identifying ten unique traits central to the widespread ancient Greeks, Hall unveils a civilization of incomparable richness and a people of astounding complexity - and explains how they made us who we are today.

'A thoroughly readable and illuminating account of this fascinating people... This excellent book makes us admire and like the ancient Greeks equally'
Independent

'Throughout, Hall exemplifies her subjects' spirit of inquiry, their originality and their open-mindedness'
Daily Telegraph

'A book that is both erudite and splendidly entertaining'
Financial Times