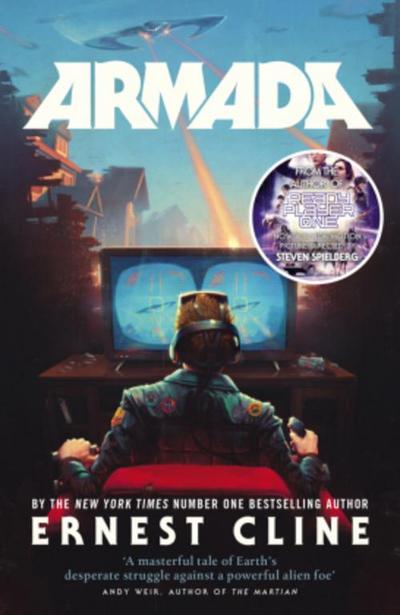 Cline, ErnestErnest Cline is a bestselling novelist, screenwriter, father, and full-time geek. He is the author of the novels Ready Player One and Armada and co-screenwriter of the blockbuster film adaptation of Ready Player One, directed by Steven Spielberg. His books have been published in over fifty countries and have spent more than 150 weeks on the New York Times bestseller lists. He lives in Austin, Texas, with his family, a time-travelling DeLorean, and a large collection of classic video games.
FROM THE BESTSELLING AUTHOR OF READY PLAYER ONE, NOW A MAJOR MOTION PICTURE DIRECTED BY STEVEN SPIELBERG

It's just another day of high school for Zack Lightman. He's daydreaming through another boring math class, with just one more month to go until graduation and freedom-if he can make it that long without getting suspended again.

Then he glances out his classroom window and spots the flying saucer.

A minute later, he's sure of it. Because the UFO he's staring at is straight out of the videogame he plays every night, a hugely popular online flight simulator called Armada-in which gamers just happen to be protecting the earth from alien invaders.

But what Zack's seeing is all too real. And his skills-as well as those of millions of gamers across the world-are going to be needed to save the earth from what's about to befall it.

Yet even as he and his new comrades scramble to prepare for the alien onslaught, Zack can't help thinking of all the science-fiction books, TV shows, and movies he grew up reading and watching, and wonder: Doesn't something about this scenario seem a little too... familiar?

Armada is at once a rollicking, surprising thriller, a classic coming of age adventure, and an alien-invasion tale like nothing you've ever read before-one whose every page is infused with author Ernest Cline's trademark pop-culture savvy.
_______________________

Here's what everyone's saying about this epic masterpiece:

'A modern masterpiece full of a new style of literary magic' - Spiros Kagadis on Amazon, 5 stars

'Excellent. Even better than Ready Player One.' - David Hay on Amazon, 5 stars

'One of my favourite books of all time. Incredibly well written' - Erin Coppin on Amazon, 5 stars

'Awesome! If you liked Ready Player One, would be very surprised if you don't like this' - T. Llewellyn-Sanders on Amazon, 5 stars

'Absolutely awesome!!! Read in less than 24 hours, hooked on every page' - R. Nicholson on Amazon, 5 stars

'Amazing and a great follow up read to Ready Player One!' - Chris on Amazon, 5 stars

'an incredible story which had me on the edge of my seat the whole time... a joy to read' - Helen Ratcliffe on Amazon, 5 stars

'Cline brings you back to all those amazing, unbelievable things you imagined could happen as a kid and makes them real' - Amazon reviewer, 5 stars

'Absolutely brilliant! Couldn't put it down, a must read' - Sam Bean on Amazon, 5 stars