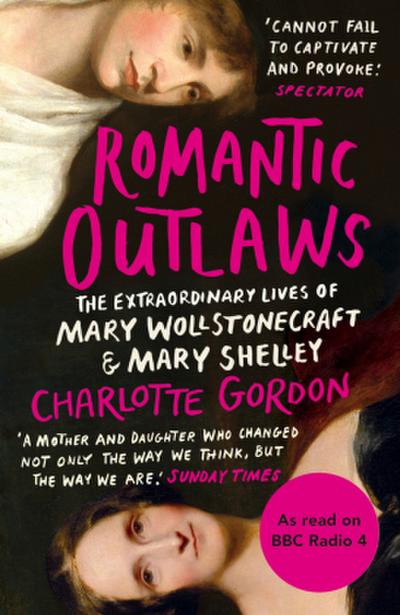 Gordon, CharlotteCharlotte Gordon is a prize-winning poet and biographer. She received her undergraduate degree in English and American Literature from Harvard University and a Ph.D. from Boston University. Since 1986, she has taught creative writing, history, literature, religion, and theatre. Her poetry has won many prizes, including a Robert Penn Warren Award. Her biography of the seventeenth-century poet, Anne Bradstreet, Mistress Bradstreet: The Untold Life of America's First Poet won a Massachusetts Book Award for non-fiction. Her latest book, Romantic Outlaws, tells of the fascinating and eerily similar lives of Mary Wollstonecraft and her daughter Mary Shelley.
Inventive, page-turning, involving biography at its best.

Romantic Outlaws is the first book to tell the story of the passionate and pioneering lives of Mary Wollstonecraft - English feminist and author of the landmark book, The Vindication of the Rights of Woman - and her novelist daughter Mary Shelley, author of Frankenstein.

'A gripping account of the heartbreaks and triumphs of two of history's most formidable female intellectuals, Mary Wollstonecraft and Mary Shelley. Gordon has reunited mother and daughter through biography, beautifully weaving their narratives for the first time.' Amanda Foreman

Both women became famous writers and wrote books that changed literary history, had passionate relationships with several men, were single mothers out of wedlock; both lived in exile, fought for their position in society, and interrogated ideas of how we should live.

Romantic Outlaws takes the reader on a vivid journey across revolutionary France and Victorian England to explore in this ground-breaking dual biography of the author of A Vindication of the Rights of Woman and the author who wrote Frankenstein - mother and daughter - a pair of visionary women, who should have shared a life, but who instead share a powerful literary and feminist legacy.