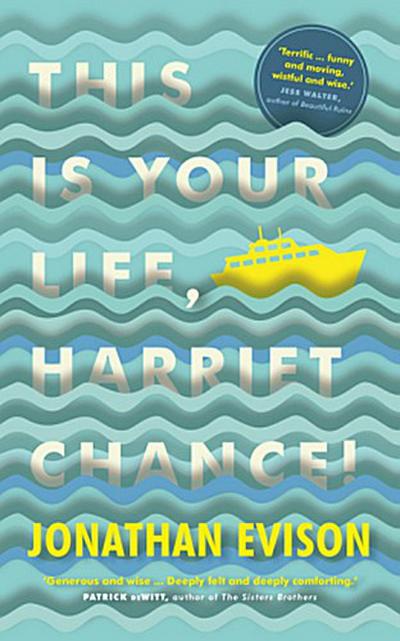 This Is Your Life, Harriet Chance!

Jonathan Evison is the author of four novels including the New York Times bestseller, West of Here. A film adaptation of his third novel, The Revised Fundamentals of Caregiving, is in production starring Paul Rudd and Selena Gomez. He lives on an island in Western Washington.
A funny and heartwarming read, Jonathan Evison has completely captured the heart and mind of a very special almost-octogenarian, perfect for fans of Jonas Jonasson and Maria Semple.
'As sweet as it is inventive, profound as it is hilarious, unflinching as it is big-hearted.'
Maria Semple, author of Where'd You Go, Bernadette

With Bernard, her husband of fifty-five years now in the grave, seventy-eight-year-old Harriet Chance impulsively sets sail on an ill-conceived Alaskan cruise that her late husband had planned. But what she hoped would be a voyage leading to a new lease of life becomes a surprising and revelatory journey into Harriet's past.

There, amid the buffets and lounge singers, between the imagined appearances of her late husband and the very real arrival of her estranged daughter mid-way through the cruise, Harriet is forced to take a long look back, confronting the truth about pivotal events that changed the course of her life. And in the process she discovers that she's been living the better part of that life under entirely false assumptions.

Part-dysfunctional love story, part exploration of the relationship between mothers and daughters, nothing is what it seems in this charming tale of what it truly means to begin again.