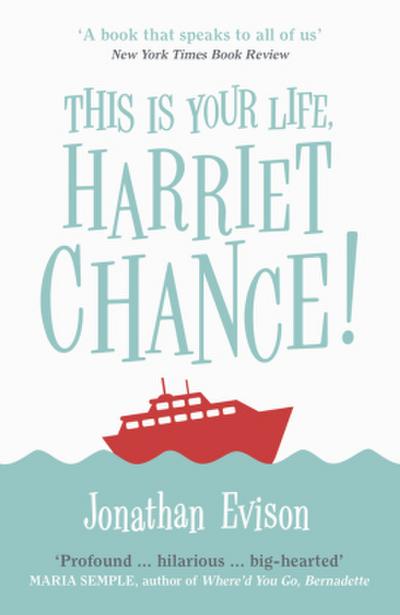 This Is Your Life, Harriet Chance!

Evison, JonathanJonathan Evison is the author of four novels including the New York Times bestseller, West of Here. A film adaptation of his third novel, The Revised Fundamentals of Caregiving, is in production starring Paul Rudd and Selena Gomez. He lives on an island in Western Washington.
It's never too late for second chances in this funny and heartwarming story perfect for fans of Jonas Jonasson and Maria Semple.

'As sweet as it is inventive, profound as it is hilarious, unflinching as it is big-hearted.'
Maria Semple, author of Where'd You Go, Bernadette

Now widowed, Harriet discovers that her late husband had been planning an Alaskan cruise. Ignoring the advice of her children and wanting to make the most of the opportunity, she decides to set sail.

There, amid the buffets and lounge singers, between the imagined appearances of Bernard and the very real arrival of her daughter, Harriet is forced to take a long look back, confronting the truth about pivotal events that changed the course of her life.

What she will discover is that she has lived the best part of her life under entirely false assumptions. Confronted with the notion that her past could have been different, will she take a second chance at life?