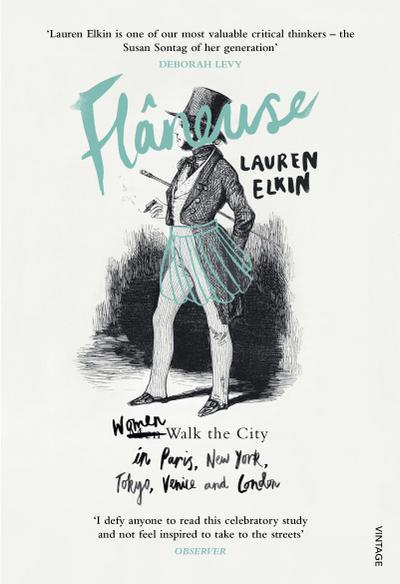 Elkin, LaurenLauren Elkin is the author of several books, including Flâneuse: Women Walk the City, a Radio 4 Book of the Week, a New York Times Notable Book of 2017, and a finalist for the PEN/Diamonstein-Spielvogel award for the art of the essay. Her essays on art, literature, and culture have appeared in the London Review of Books, the New York Times, Granta, Harper's, Le Monde, Les Inrockuptibles, and Frieze, among others. She is also an award-winning translator, most recently of Simone de Beauvoir's previously unpublished novel The Inseparables. After twenty years in Paris, she now lives in London.
Part memoir, part biography, part cultural meander, an irresistibly intelligent literary walk through the lives of wandering women: about how, by putting one foot in front of the other, we can sometimes stumble upon different routes in our lives

Selected as a Book of the Year 2016 by the Financial Times, Guardian, New Statesman, Observer, The Millions and Emerald Street

'Flâneuse [flanne-euhze], noun, from the French. Feminine form of flâneur [flanne-euhr], an idler, a dawdling observer, usually found in cities.

That is an imaginary definition.'

If the word flâneur conjures up visions of Baudelaire, boulevards and bohemia - then what exactly is a flâneuse?

In this gloriously provocative and celebratory book, Lauren Elkin defines her as 'a determined resourceful woman keenly attuned to the creative potential of the city, and the liberating possibilities of a good walk'. Part cultural meander, part memoir, Flâneuse traces the relationship between the city and creativity through a journey that begins in New York and moves us to Paris, via Venice, Tokyo and London, exploring along the way the paths taken by the flâneuses who have lived and walked in those cities.

From nineteenth-century novelist George Sand to artist Sophie Calle, from war correspondent Martha Gellhorn to film-maker Agnes Varda, Flâneuse considers what is at stake when a certain kind of light-footed woman encounters the city and changes her life, one step at a time.