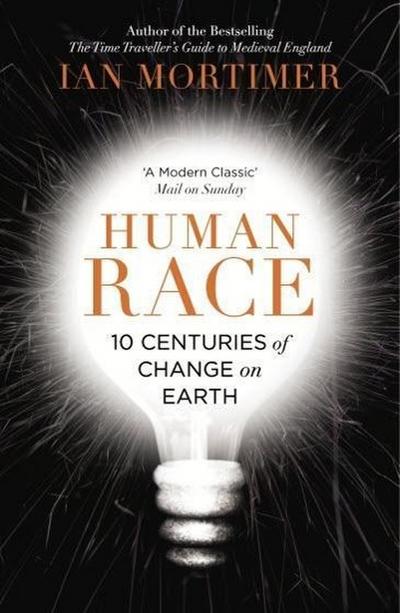 Mortimer, IanDr Ian Mortimer is the Sunday Times bestselling author of The Time Traveller's Guides to Medieval England, Elizabethan England, Restoration Britain and Regency Britain as well as four critically acclaimed medieval biographies, and numerous scholarly books and articles on subjects ranging in date from the twelfth to the twentieth centuries. He was elected a Fellow of the Royal Historical Society in 1998 and a Fellow of the Society of Antiquaries in 2015. His work on the social history of medicine won the Alexander Prize in 2004 and was published by the Royal Historical Society in 2009. He lives in Moretonhampstead, on the edge of Dartmoor.
A thrilling tour of a millenium of human innovation

We are an astonishing species. Over the past millennium of plagues and exploration, revolution and scientific discovery, woman's rights and technological advances, human society has changed beyond recognition.

Sweeping through the last thousand years of human development, Human Race is a treasure chest of the lunar leaps and lightbulb moments that, for better or worse, have sent humanity swerving down a path that no one could ever have predicted.

But which of the last ten centuries saw the greatest changes in human history?

History's greatest tour guide, Ian Mortimer, knows what answer he would give. But what's yours?