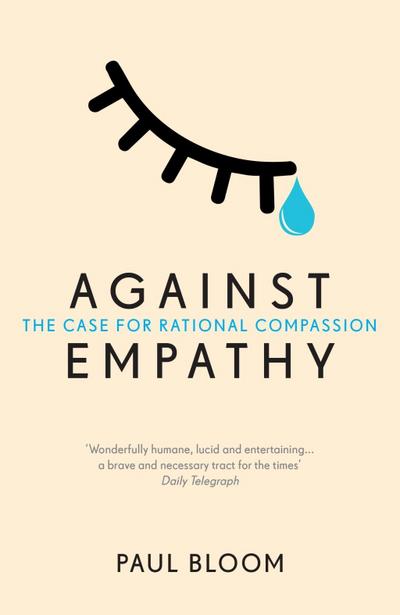 Bloom, PaulPaul Bloom is Professor of Psychology at Yale University. He is an internationally recognised expert on the psychology of language, social reasoning, morality and art. His previous books include Just Babies and How Pleasure Works, and he has written for numerous publications, including the New York Times, New Yorker and the Guardian. Bloom has won several awards for his research, articles and teaching, and his 'Introduction to Psychology' class was one of seven selected by Yale to be made available worldwide. His TED talks have been viewed 2.8 million times.
This landmark scientific investigation by one of the world's leading psychologists reveals empathy to be our most dangerous emotion

In a divided world, empathy is not the solution, it is the problem.

We think of empathy - the ability to feel the suffering of others for ourselves - as the ultimate source of all good behaviour. But while it inspires care and protection in personal relationships, it has the opposite effect in the wider world. As the latest research in psychology and neuroscience shows, we feel empathy most for those we find attractive and who seem similar to us and not at all for those who are different, distant or anonymous. Empathy therefore biases us in favour of individuals we know while numbing us to the plight of thousands. Guiding us expertly through the experiments, case studies and arguments on all sides, Paul Bloom ultimately shows that some of our worst decisions - in charity, child-raising, criminal justice, climate change and war - are motivated by this wolf in sheep's clothing.

Brilliantly argued, urgent and humane, Against Empathy overturns widely held assumptions to reveal one of the most profound yet overlooked sources of human conflict.