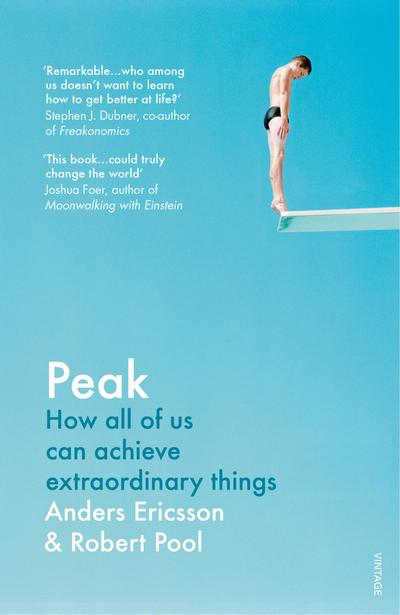 Professor Anders Ericsson is the world's reigning expert on expertise. His research into what makes ordinary people achieve the extraordinary was the inspiration for the 10,000-hours rule - the popular theory that 10,000 hours of any type of practice will allow an individual to excel in any field. In this book, he describes how a particular type of extended practice leads to exceptional performance.

Anders Ericsson began his research into expertise when he conducted a memory trial on a young man. Despite having no previous aptitude for memory exercises, after several hundred sessions the young man was displaying memory powers over 10 times that of an average person. This was as a result of the system of training Ericsson had put him through - a process Ericsson has named 'deliberate practice'.

Professor Ericsson has gone on to have his research widely cited in major newspapers and magazines worldwide, and he has worked with major international organisations, as well as Oxford, Stanford and Harvard medical schools, teachers and educational researchers, professional sports teams (Manchester City Football Club, Saracens Rugby Union Club, UK Sport, England and Wales Cricket Board), and military groups.

Pool, RobertRobert Pool is a science writer who has worked at some of the world's most prestigious science publications, including Science and Nature, and his writing has appeared in many others. He is the author of three previous books.
Reveals that all of us can excel at our chosen activities and offers a guide to unlocking our potential

'Anyone who wants to get better at anything should read Peak.' Fortune

Do you want to stand out at work, improve your athletic or musical performance, or help your child achieve academic goals?

Anders Ericsson has made a career studying chess champions, violin virtuosos, star athletes, and memory mavens. Peak distils three decades of myth-shattering research into a powerful learning strategy that is fundamentally different from the way people traditionally think about acquiring new abilities. Ericsson's revolutionary methods will show you how to improve at almost any skill that matters to you, and that you don't have to be a genius to achieve extraordinary things.

'Remarkable...who among us doesn't want to learn how to get better at life?' Stephen J. Dubner, co-author of Freakonomics

'This book...could truly change the world' Joshua Foer, author of Moonwalking with Einstein