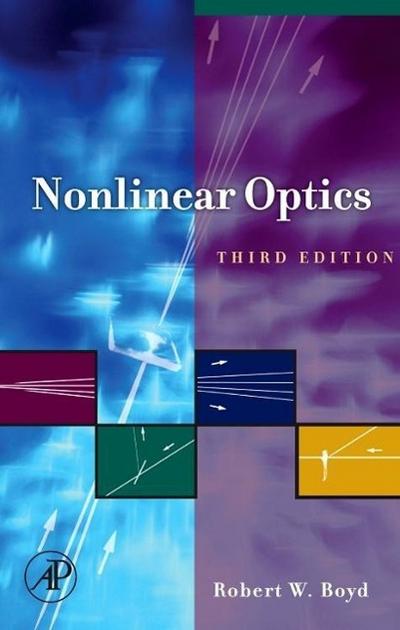 Boyd, Robert W.Robert W. Boyd was born in Buffalo, New York. He received the B.S. degree in physics from the Massachusetts Institute of Technology and the Ph.D. degree in physics in 1977 from the University of California at Berkeley. His Ph.D. thesis was supervised by Professor Charles H. Townes and involved the use of nonlinear optical techniques in infrared detection for astronomy. Professor Boyd joined the faculty of the Institute of Optics of the University of Rochester in 1977 and since 1987 has held the position of Professor of Optics. Since July 2001 he has also held the position of the M. Parker Givens Professor of Optics. His research interests include studies of nonlinear optical interactions, studies of the nonlinear optical properties of materials, the development of photonic devices including photonic biosensors, and studies of the quantum statistical properties of nonlinear optical interactions. Professor Boyd has written two books, co-edited two anthologies, published over 200 research papers, and has been awarded five patents. He is a fellow of the Optical Society of America and of the American Physical Society and is the past chair of the Division of Laser Science of the American Physical Society.
1. The Nonlinear Optical Susceptibility
2. Wave-Equation Description of Nonlinear Optical Interactions
3. Quantum-Mechanical Theory of the Nonlinear Optical Susceptibility
4. The Intensity-Dependent Refractive Index
5. Molecular Origin of the Nonlinear Optical Response
6. Nonlinear Optics in the Two-Level Approximation
7. Processes Resulting from the Intensity-Dependent Refractive Index
8. Spontaneous Light Scattering and Acoustooptics
9. Stimulated Brillouin and Stimulated Rayleigh Scattering
10. Stimulated Raman Scattering and Stimulated Rayleigh-Wing Scattering
11. The Electrooptic and Photorefractive Effects
12. Optically Induced Damage and Multiphoton Absorption
13. Ultrafast and Intense-Field Nonlinear Optics

Nonlinear optics is the study of the interaction of intense laser light with matter. The third edition of this textbook has been rewritten to conform to the standard SI system of units and includes comprehensively updated material on the latest developments in the field.

The book presents an introduction to the entire field of optical physics and specifically the area of nonlinear optics, covering fundamental issues and applied aspects of this exciting area.

Nonlinear Optics will have lasting appeal to a wide audience of physics, optics, and electrical engineering students, as well as to working researchers and engineers. Those in related fields, such as materials science and chemistry, will also find this book of particular interest.