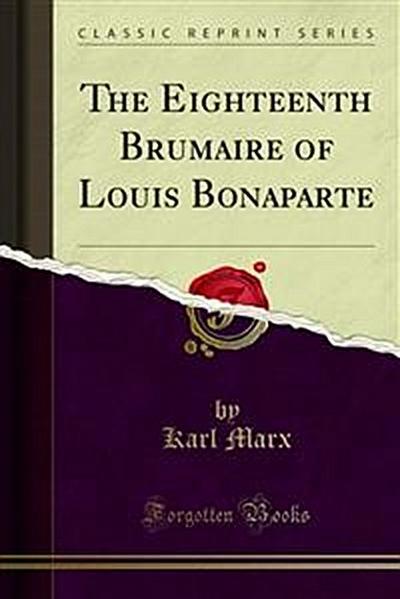 The Eighteenth Brumaire of Louis Bonaparte

A pedantic, supercilious notion is extensively abroad among us that we are an Anglo Saxon nation; and an equally pedantic, super cilious habit causes many to look to England for inspiration, as from a racial birthplace. Nevertheless, for weal or for woe, there is no such thing extant as anglo-saxon — of all nations, said to be. Anglo — Saxon, in the United States least. What we still have from England, much as appearances may seem to point the other way, is not of our bone-and marrow, so to speak, but rather partakes of the nature of importations. We are no more' English on account of them than we are Chinese because we all drink tea. Of all European nations, France is the one to which we come nearest. Besides its repub lican form-of government — the directness of its history, the unity 'of its actions, the sharp ness that marks its internal development, are all characteristics that find their parallel here best, and vice versa. In all essentials the study of 'modern French history, particularly when sketched by such a master hand as Marx', is the most valuable one for the acquisition of that historic, social and biologic insight that our country stands particularly in need of, and that will be inestimable during the approach ing critical days.