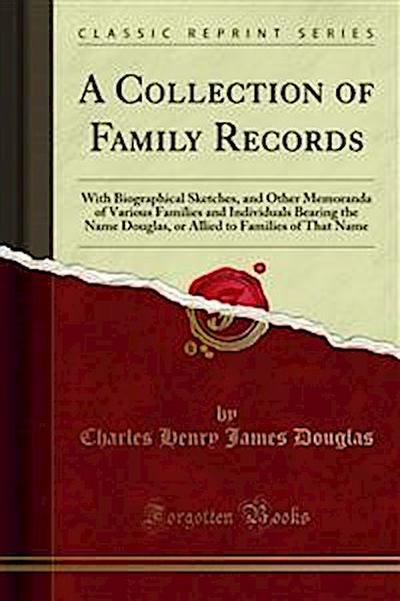 A Collection of Family Records

The arrangement of records in the following pages has been simplified as far as possible. Following the sketch of each in dividual is a list of the children, numbered consecutively in small Roman figures at the left. If any of the children arato appear again as heads Of families, they have also a number, in Arabic figures at the left of the Roman figures, and by looking for this number in the center of the page further on in the book, the persons will be found. Descendants in female lines, how ever, are not given separate Arabic numbers at the left, but are all given in order, from the eldest to the youngest, through the several generatioris, following the sketch of the last individual whose name was Doug.las Small figures are placed just above the names of all descendants, whether in male or female lines, which denote the number of the generation, reckoning from the progenitor of the family, who is number 1. By observing these generation numbers, as well as the consecutive numbers, both Roman and Arabic, of the names, the relationship of persons can be readily determined.