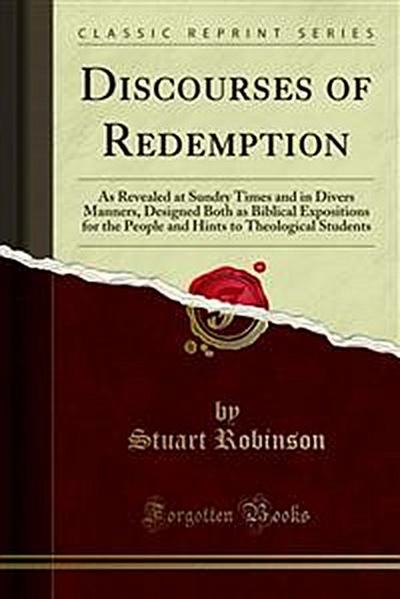 Students of Arts, Law, Medicine and Theology in the various institutions Of learning in Toronto, which specially and very intelligently pointed out the benefits which they considered themselves to have received from the exposition of the gospel in the order of the successive revelations, under the several covenants in the history of redemption. The present volume is the result Of an attempt to give per manent form, so far as oral instruction can be transferred to the printed page, to such outline Specimens Of the author's Biblical Expositions in the several sections of the inspired Word as might be most suggestive to younger preachers in their attempts to develop the various parts of Scripture to the comprehension of the people, and at the same time be instruc tive to Christians, and inquirers, and other earnest persons troubled with doubts touching the inspiration or the doctrines of the Bible. From the titles of the several sections, it will be seen that this is not a collection of miscellaneous discourses, but a logical development of the gospel in the order of its communication. And from the titles of the several discourses under each section it will be seen that the general aim is to discuss some of the more germinal points Of each revelation. Want of space for the full execution of his plan has compelled the author to omit several subjects embraced in the programme originally, and has suggested the purpose, if the present effort is acceptable to the public, to prepare a second series of Discourses of Redemption, filling up more completely this outline, while yet constituting a volume com plete in itself, devoted more especially to the great cardinal truths developed in the symbols of the Protestant Reformation.