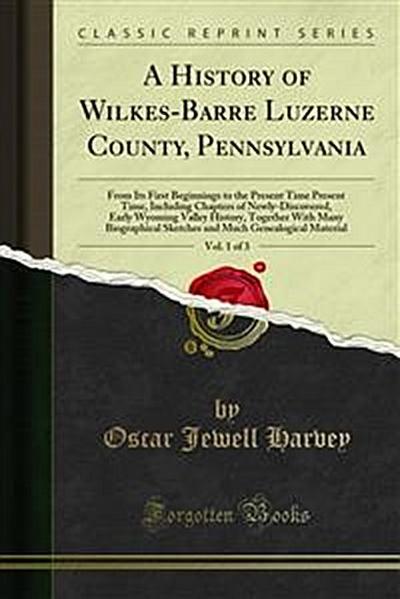 In gathering together material for this work I Spent upwards of three years before attempting to prepare for the printer a Single page of copy. At length, having effected what I then believed to be an exhaustive search for interesting and authentic historical matter relat ing to wilkes-barre and Wyoming Valley, I began the task of putting the same in Shape for the printer; and soon thereafter the actual work of printing the following pages was begun. But, while preparing copy, and reading proofs Of the printer's work, I sought in new directions for additional historical data, and met with unusual and pronounced success. One find seemed to lead to another find, and the large amount Of theretofore unused and absolutely valu able material, which it was my good fortune to turn up, soon convinced me that it would be necessary for me either to recast my plans and enlarge the scope of my work, or else discard entirely my latest finds. Meanwhile, I had been urged by competent and esteemed advisers to devote as much space in my book as possible to an account of the vari ous clans and tribes of Indians which at one time or another had ocon pied Wyoming Valley. After careful consideration it seemed to me that, in the circum stances, the proper course for me to pursue was: to stop the work of printing, and devote a considerable amount of time to further investiga tion and consideration of the subject matter in hand. In the execution of this plan a large amount of time has been necessarily expended, the printing Of the work has gone on by. Slow degrees, and, instead of appearing in one volume of about 700 pages (as originally intended, and arranged for), the work comprises three royal 8vo volumes, aggregating over pages. Two of these volumes are published at this time, while the third and final volume (which will contain a very complete and comprehensive index to the three volumes) will appear about the close of the present year.