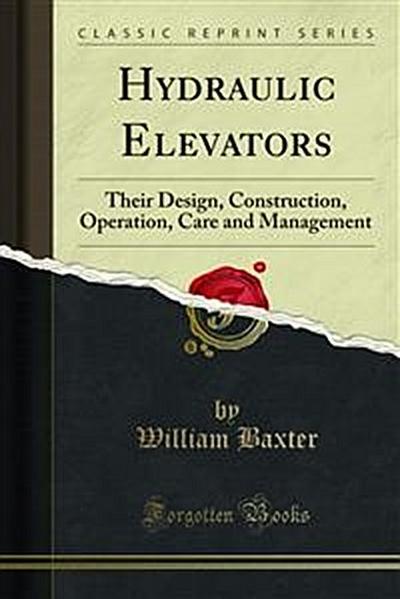 The elevators so far considered are of the type known as low pressure, and are actuated with water pressures ranging between about 40 and 175 pounds per square inch. In the early days of hydraulic elevators the pressure was obtained by pumping water into a tank located upon the roof of the building, and as a column of water of one square inch cross section weighs about of a pound per foot of hight, the pressure seldom exceeded 50 pounds, and in many cases was as low as 30 pounds per square inch. With the advent of high buildings greater car speed was demanded, and this necessitated increasing the power of the elevator machine. This increase could be obtained in two ways, one by making the cylinder of larger diameter, and the other by increasing the pressure. As space in the buildings was valuable, the latter plan was adopted, and in order to obtain the increased pressure; a closed pressure tank was substituted for the open roof tank. The pressure tank had been used years before the time of high-power elevators, in buildings that were so low that the pressure obtained from an open tank on the roof was not high enough to keep the diameter of the cylinder within reasonable bounds; but from this time all elevators installed in high buildings were operated with water drawn from pressure tanks. The general introduction of the pressure tank resulted in an increase in the working pressure to from 75 to 100 pounds. By this increase the size of the cylinder, the tanks and the piping can be considerably reduced, with a corresponding saving in space and material. With the continued increase in the hight of buildings the pressure has been increased, so that at the present time it is common practice to use pressures up to 180 pounds and even a little higher.