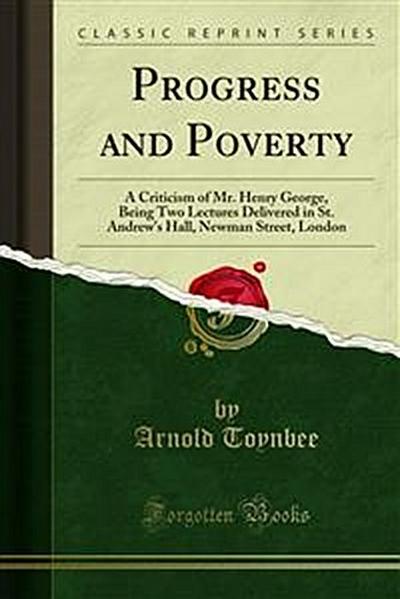 The book which Mr. George wrote between 1877 and 1879 is, as we all know, a remarkable one. It is full of acute dialectic and splendid declamation full, as I said in my opening remarks, of a real and keen sympathy with the people. Indeed, as he tells us in his book, he might well sympathise with the people, for he had been a work man himself. Nevertheless, remarkable as the book is, original as the book is — not so original as many of us suppose, not so original if we come to look back upon American economic literature — it has yet, in spite Of partial truths, promulgated errors which I believe to be fundamentally dangerous. And I, for one, seeing how much wrong the economists have done in the past by false theories, remembering that the economists for years denounced Trades Unions, and told the unionists thatthey could not raise the rate of wages by combination; remembering that the economists have sometimes inﬂuenced legislation in the past in a mischievous direction, that they were guilty, for instance, Of the Irish Land Act of 1860, which substi tuted contract for tenure; I am determined that, as far as in me lies, I will be no party to any more illusions. I will do what I can to further the public good, but I will not sacrifice my intellectual conscience by supporting a fair, but delusive panacea.