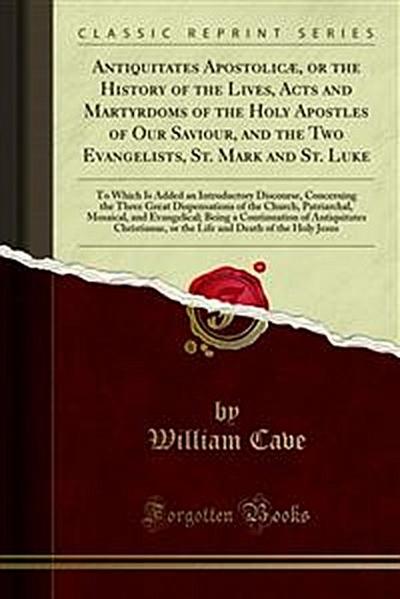 Antiquitates Apostolicæ, or the History of the Lives, Acts and Martyrdoms of the Holy Apostles of Our Saviour, and the Two Evangelists, St. Mark and St. Luke

The tradition Of Elias. The three great periods of tlgie church. The patriarchal age. The laws then in force natura or posi tive. Natural Laws what; evinced from the testimony of na tural conscience. The seven precepts of the sons Of Noah. Their respect to the law of nature. Positive laws under that Dispensation. Eating blood why prohibited. The mystery and signification of it. Circumcision when commanded and why. The laws concerning religion. Their public worship what. Sacrifices in what sense natural, and how far instituted. The manner of God's testifying his acceptance. What the place Of their public worship. Altars and groves whence. Abraham's oak, its long continuance and destruction by Constantine. The original of the Druids. The times of their religious assem blies. In firocess oftz'me, Genes. 4. What meant by it. The se venth day whether kept from the beginning. The ministers of religion who. The priesthood of the first-born. In what cases exercised by younger sons. The state of religion suc cessively under the several patriarchs. The condition of it in Adam's family. The sacrifices Of Cain and Abel, and their dif ferent success, whence. Seth, his great learning and pietv. The face Of the church in the time of Enosh. What meant by, Then began men to call upon the name oft/ze Lord. NO idolatry before the ﬂood. The sons of God, who. The great corrup tion of religion in the time of Jared. Enoch's piety and walk ing with God. His translation what. The incomparable sanc tity of Noah, and his strictness in an evil age. The character of the men of that time. His preservation from the deluge. God's Covenant with him. Shem or Japhet whether the elder brother. The confusion Of languages when, and why. Abra ham's idolatry and conversion. His eminency for religion noted in the several instances Of it. God's covenant with him concerning the Messiah. The piety of Isaac and Jacob. Jacob's blessing the twelve tribes, and foretelling the Messiah. Pa triarchs extraordinary under this dispensation. Melchisedech whoz'wherein a type of Christ. Job, his name, country, kindred, quality, religion, sufferings; when he lived. A reﬂection upon the religion of the old world, and its agreement with Christi anity.