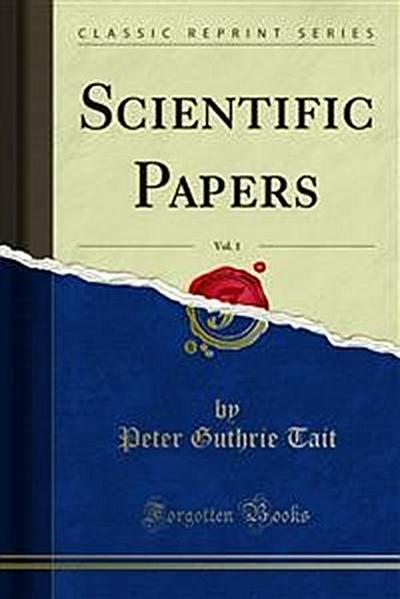 When the Syndics of the University Press did me the unexpected honour of proposing to reprint such of my scientific papers as I should select, they advised me to lean, in doubtful cases, rather to the side of comprehension than to that of exclusion. The selection has given me considerable anxiety, for (even after the numerous polemical items had, of course, been set aside) the doubtful cases formed a large majority.Since I took my degree the greater part of my time has been spent in teaching and its necessary concomitants. The rest, except in so far as it was devoted to the preparation of text-books, has been occupied rather with fresh mathematical or experimental inquiries than in fully "writing out" the results of earlier ones. Thus the present collection presents a very irregular aspect: - a few only of the papers giving anything like full details, while the remainder are often of the most fragmentary character, being in many cases no more than very condensed abstracts.Among the more detailed papers are the earlier of those in which quaternions are employed. These were written while I was endeavouring to familiarise myself with the new calculus, and were, in great part, worked out before I had any communication with Sir W. R. Hamilton except through his Lectures (1853); a fascinating book, which, by great good fortune, I had taken with me on a vacation tour as a companion for wet days. When I made Hamilton's acquaintance a year or two later, through Dr Andrews, I submitted to him some of the more formidable difficulties which I had met in the study of his great work, and the hints I thus obtained were of much use to me in finally preparing these papers for publication. As they received a cordial imprimatur from Hamilton, with a notice recommending them to the attention of students of the subject, I had no hesitation in deciding to reprint them in the present collection.