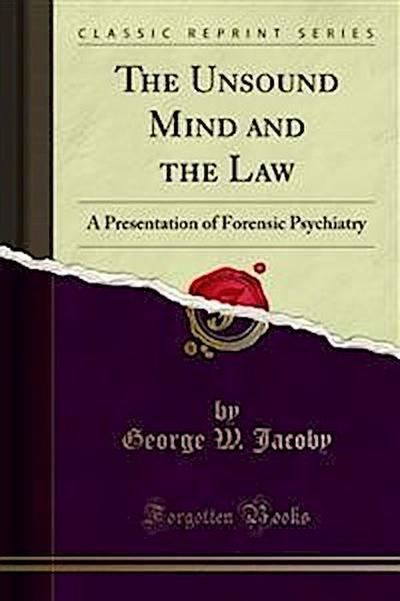 The Unsound Mind and the Law

Most English or American books on forensic psychiatry have a distinct tendency to subordinate the medical viewpoints to the juristic ones as the latter find their expression in our prevailing laws and judicial decisions. The extent to which the subject-matter must consequently suffer becomes particularly manifest when the more recent advances in psychiatric medicine arc contrasted with the conservatism, or let us rather say stagnation, that exists in English and American laws in the same field."Wherever the existing law and modem medicine disagree, there is a tendency to give the former a more plausible recognition than it actually deserves, or to assume that the latter, notwithstanding its scientific basis, is at least problematic, and therefore to attempt to fashion it to accord with the juristic mold.The lack of courage to admit frankly the inadequacies or inequities of the partly antiquated law is defended by the specious plea of "practical social needs." In the borderland cases where doubt exists as to whether a legal or a medical remedy should be applied, the criminal law supposedly meets these "needs" best by committing the anti-social — that is, the insane — elements of the community to prison instead of to a hospital. We will admit without reserve that even the most ideal law cannot fully accord with all the requirements of medical science, for social order demands a more or less categorically incisive legal treatment, which in the individual case may act as a hardship, occasionally even as an injustice. But it is certainly the duty of our lawmakers to prevent such hardship or injustice as far as lies within human power.The science of medicine must constitute the logical basis for every treatise on juristic psychiatry, for the medical facts alone are stable, even if their scientific recognition may be uncertain and may vary with the lapse of time.