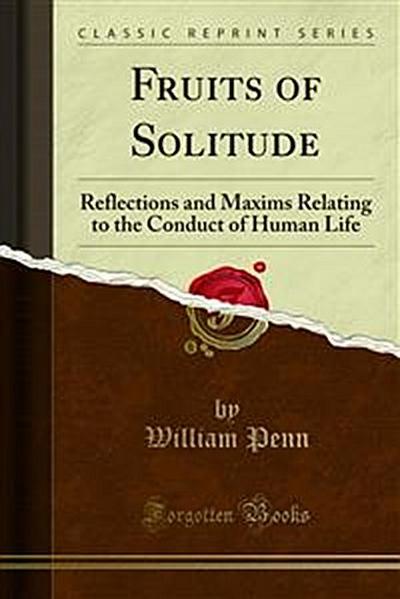 The author blesseth God for his retirement, and kisses that gentle hand which led him into it: for though it should prove barren to the world, it can never do so to him. He has now had some time he could call his own, a property he was never so much master of before: in which he has taken a view of himself and the world; and observed wherein he hath hit and missed the mark; what might have been done, what mended, and what avoided, in his human conduct: to gether with the omissions and excesses of others, as well societies and governments, as private families and persons. And he verily thinks, were he to live over his life again, he could not only, with God's grace, serve him, but his neighbour and himself, better than he hath done, and have seven years of his time to spare. And yet, perhaps, he hath not beenthe worst or the idlest man in the world; nor is he the oldest. And this is the rather said, that it might quicken thee, reader, to lose none of the time that is yet thine. There is nothing of which we are apt to be so lavish as of time, and about which we ought to be more solicitous; since without it we can do nothing in this world. Time is what we want most, but what, alas! We use worst; and for which God will certainly most strictly reckon with us, when time shall be no more. It is of that moment to us in reference to both worlds, that I can hardly wish any man better, than that he would seriously consider what he does with his time; how and to what end he employs it; and what returns he makes to God, his neighbour, and himself for it. Will he never have a ledger for this; this, the greatest wisdom and work of life? To come but once into the world, and triﬂe away our true enjoyment of it, and of our selves in it, is lamentable indeed. This one reﬂection would yield a thinking person great instruction. And since nothing below man can so think, man, in being thoughtless, must needs fall below himself. And that, to be sure, such do, as are unconcerned in the use of their most precious time.