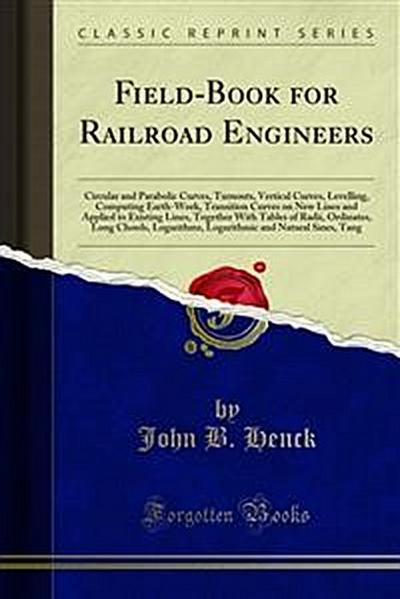 When the length of the arc is desired, it may be found by the method given in
13, which is exact for curves laid out with chords of any length.Matters formerly in an Appendix have been transferred to their proper places in the text. Some of them have been more fully developed, especially those relating to turnouts tangent to the main line.Transition curves have been more fully treated, and by methods entirely new. These curves have assumed great importance in view of the high speed of modern trains. The shock on entering and leaving a curve, and the danger of derailment, may be greatly reduced by a transition curve, if carefully located and laid with rails that have been accurately curved. Both these essentials are secured by the methods here given. Certain portions of the discussion involve the calculus, but the actual laying out of the curve merely requires the engineer to fix upon the length of curve he deems best, after which all the data for locating the curve, either by tangent offsets or by deflection angles, are found on a single line of a short table. The method of applying a transition curve to an existing track is equally simple. The deflection angle of the existing circular curve and its tangent point being known, and the length of the proposed transition curve chosen, a single line of a short table gives the data for locating the curve. In this table the ratio of the two radii concerned is taken as .9, but the general formulæ are not confined to any particular ratio. It will be seen that these methods do not require the central circular curve to be of some whole degree. The deflection angle D of the central curve may have any value we please - a manifest advantage.For curving the rails accurately the ordinates at the centre and at the quarter points are required. These are readily found, especially when the curve is made to begin at a joint.