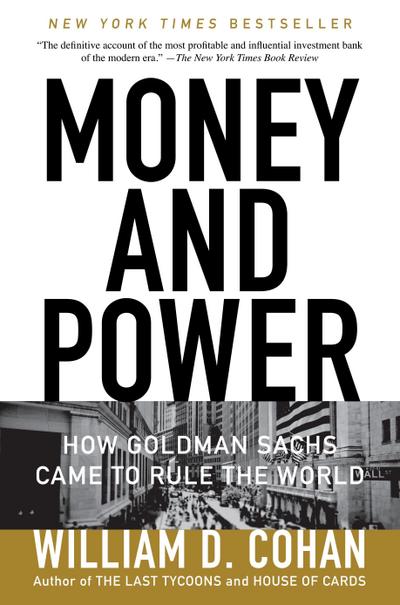 William D. Cohan is the author of the New York Times bestsellers House of Cards and The Last Tycoons, which won the 2007 FT/Goldman Sachs Business Book of the Year Award. He is a contributing editor at Vanity Fair, has a weekly opinion column in Bloomberg View, and writes frequently for Fortune, The Atlantic, Art News, BloombergBusinessWeek, The New York Times, The Financial Times, The Irish Times and The Washington Post, among other publications. He also is a contributing editor on Bloomberg Television and a frequent on-air contributor to MSNBC, CNN and CNBC. A former investment banker, Cohan is a graduate of Duke University, Columbia University School of Journalism and the Columbia University Graduate School of Business.
The bestselling author of the acclaimed House of Cards and The Last Tycoons turns his spotlight on to Goldman Sachs and the controversy behind its success.
From the outside, Goldman Sachs is a perfect company. The Goldman PR machine loudly declares it to be smarter, more ethical, and more profitable than all of its competitors. Behind closed doors, however, the firm constantly straddles the line between conflict of interest and legitimate deal making, wields significant influence over all levels of government, and upholds a culture of power struggles and toxic paranoia. And its clever bet against the mortgage market in 2007-unknown to its clients-may have made the financial ruin of the Great Recession worse. Money and Power reveals the internal schemes that have guided the bank from its founding through its remarkable windfall during the 2008 financial crisis. Through extensive research and interviews with the inside players, including current CEO Lloyd Blankfein, William Cohan constructs a nuanced, timely portrait of Goldman Sachs, the company that was too big-and too ruthless-to fail.