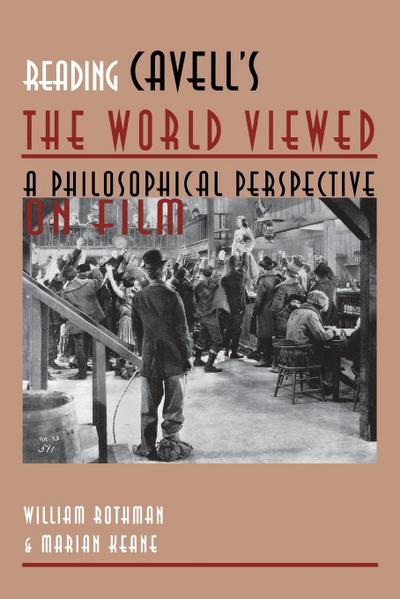 William Rothman is a professor of motion pictures and director of the Graduate Program in Film Studies at the University of Miami. He is the author of the definitive Hitchcock-The Murderous Gaze (Harvard University Press, 1982), The "I" of the Camera: Essays in Film History, Criticism and Aesthetics (Cambridge University Press, 1989), and Documentary Film Classics (Cambridge University Press, 1998) Marian Keane is an assistant professor of film studies at the University of Colorado.
Reading "The World Viewed". Part I Preface: A Metaphysical Memoir. Part II Chapters 1-5: What Is Film? Part III Chapters 6-9: Film's Origins and History. Part IV Chapters 10-11: The End of the Myths. Part V Chapters 12-13: The World as a Whole. Part VI Chapters 14-15: Automatism. Part VII Chapters 16-18: Film and Theatricality. Part VIII Chapter 19: The Acknowledgement of Scilence. Appendix: Cavell's Philosophical Procedures and "Must We Mean What We Say?".
In their thoughtful study of one of Stanley Cavell's greatest yet most neglected books, William Rothman and Marian Keane address this eminent philosopher's many readers, from a variety of disciplines, who have neither understood why he has given film so much attention, nor grasped the place of The World Viewed within the totality of his writings about film.Rothman and Keane also reintroduce The World Viewed to the field of film studies. When the new field entered universities in the late 1960s, it predicated its legitimacy on the conviction that the medium's artistic achievements called for serious criticism and on the corollary conviction that no existing field was capable of the criticism filmed called for. The study of film needed to found itself, intellectually, upon a philosophical investigation of the conditions of the medium and art of film. Such was the challenge The World Viewed took upon itself. However, film studies opted to embrace theory as a higher authority than our experiences of movies, divorcing itself from the philosophical perspective of self-reflection apart from which, The World Viewed teaches, we cannot know what movies mean, or what they are.Rotham and Keane now argue that the poststructuralist theories that dominated film studies for a quarter of a century no longer compel conviction, Cavell's brilliant and beautiful book can provide a sense of liberation to a field that has forsaken its original calling. read in a way that acknowledges its philosophical achievement, The World Viewed can show the field a way to move forward by rediscovering its passion for the art of film.Reading Cavell's The World Viewed will prove invaluable to scholars and students of film and philosophy, and to those in other fields, such as literary studies and American studies, who have found Cavell's work provocative an fruitful.