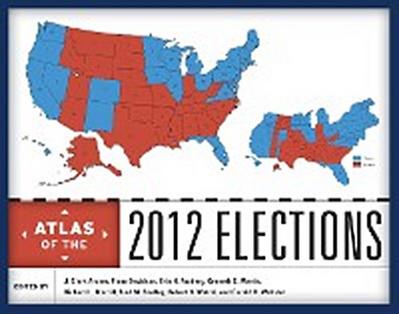 Atlas of the 2012 Elections

The presidential election of 2012 was hotly contested, with polls showing President Barack Obama and Governor Mitt Romney neck-and-neck at various points during the campaign. In the end, Democrat Obama won reelection by nearly four percentage points at the national level; he won 26 states and the District of Columbia to Republican Romney’s 24 states. Obama’s victory confirmed that the election of the first African American president in 2008 was not a fluke, suggesting that racial attitudes in the United States have indeed matured in the recent past. Bringing together leading political geographers and political scientists, this authoritative atlas analyzes and maps the campaigns, primaries, general election, and key state referenda in the 2012 elections.

The contributors offer a comprehensive and detailed assessment of a wide array of election issues and results including presidential primaries; newspaper endorsements and campaign stops; the results of the presidential election at the regional and national levels; and key voting patterns by race and ethnicity, religion, occupational groups, age, and poverty. Moving beyond the national race, the atlas examines important senatorial and gubernatorial races and considers selected state referenda including the marijuana votes in Colorado and Washington and same-sex marriage referenda in Maryland, Washington, Colorado, and Minnesota. The voting patterns identified in 2012 elections are also compared to earlier contests to provide political and geographic context over time.

Illustrated with nearly 200 meticulously drawn full-color maps, the atlas will be an essential reference and a fascinating resource for pundits, voters, campaign staffs, and political junkies alike.