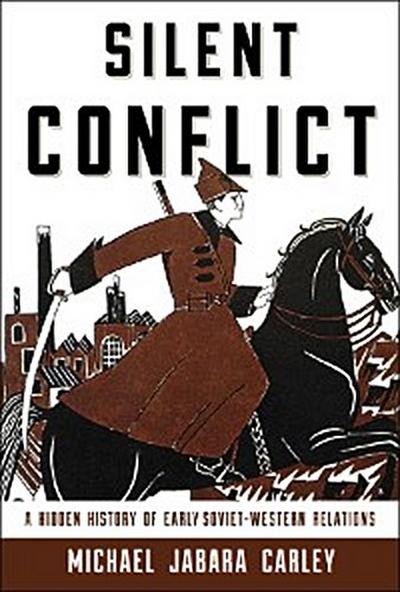 This deeply informed book provides a rare inside look at the previously hidden history of the formative years of Soviet foreign policy making and the Soviet Union’s early relations with the West. Michael Jabara Carley draws on twenty-five years of research in declassified Soviet and western archives to present the most authoritative history available of the foreign policy of the Soviet state. His lively and illuminating window into the overt and covert struggle and ultimate standoff between the USSR and the West during the 1920s will be invaluable for all readers interested in the formative years of the Cold War.
This deeply informed book traces the dramatic history of early Soviet-western relations after World War I. Michael Jabara Carley provides a lively exploration of the formative years of Soviet foreign policy making after the Bolshevik Revolution, especially focusing on Soviet relations with the West during the 1920s. Carley demonstrates beyond doubt that this seminal period—termed the “silent conflict” by one Soviet diplomat—launched the Cold War. He shows that Soviet-western relations, at best grudging and mistrustful, were almost always hostile. Concentrating on the major western powers—Germany, France, Great Britain, and the United States—the author also examines the ongoing political upheaval in China that began with the May Fourth Movement in 1919 as a critical influence on western-Soviet relations.

Carley draws on twenty-five years of research in recently declassified Soviet and western archives to present an authoritative history of the foreign policy of the Soviet state. From the earliest days of the Bolshevik Revolution, deeply anti-communist western powers attempted to overthrow the newly formed Soviet government. As the weaker party, Soviet Russia waged war when it had to, but it preferred negotiations and agreements with the West rather than armed confrontation. Equally embattled by internal struggles for power after the death of V. I. Lenin, the Soviet government was torn between its revolutionary ideals and the pragmatic need to come to terms with its capitalist adversaries. The West too had its ideologues and pragmatists. This illuminating window into the overt and covert struggle and ultimate standoff between the USSR and the West during the 1920s will be invaluable for all readers interested in the formative years of the Cold War.
Chapter 1: How It Began: Revolution, Intervention, Civil War, 1917–1921
Chapter 2: “We Must Trade and They Must Trade”: First Attempts at Peaceful Coexistence, 1921–1922
Chapter 3: Which Way Soviet Policy? Confusion and Incoherence, 1922–1923
Chapter 4: “Hedged in by Reservations”: Peaceful Coexistence in London and Paris, 1923–1924
Chapter 5: “Save the Family Silver”: Fearful Coexistence in Paris and Berlin, 1924–1925
Chapter 6: “Steady! Don’t Let Us Get Jumpy”: Revolution in China, 1924–1925
Chapter 7: Principles and Reprisals: Hostile Coexistence in London and Washington, 1925–1926
Chapter 8: “The Blind and the Lame”: Rapallo Reaffirmed, 1925–1927
Chapter 9: Red Scare, War Scare: China and the Rupture of Anglo-Soviet Relations, 1925–1927
Chapter 10: “Colossal Misfortune”: Hostile Coexistence in Paris, 1925–1927
Chapter 11: “These Are Times of Quick Suspicions”: Sullen Coexistence, 1927–1930
Chapter 12: “Always a Trump in Our Game”: Rapallo Sustained, 1927–1930
Chapter 13: Conclusion: Sorting it Out
Selected Bibliography