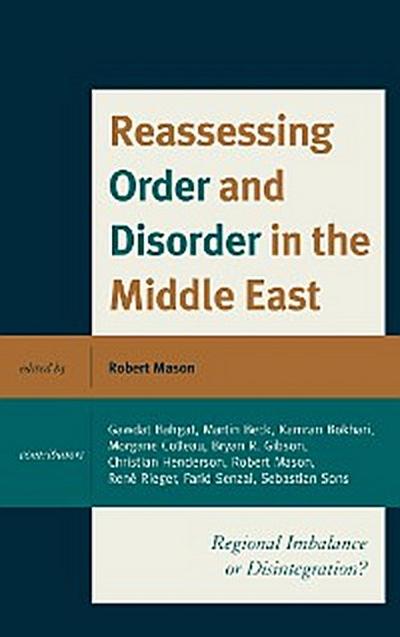 Reassessing Order and Disorder in the Middle East

Case studies help identify the emerging trends and influences that dominate the political decision making and policy behavior of many states in the Middle East. The chapters investigate foreign policy challenges and debates in various states, changing relations and balance of power between them, and the continuing role of the US in the region.
The Middle East is undergoing a period of profound change, partly brought about by the United States’ interventions in Afghanistan and Iraq, but also by the Arab Spring. This is affecting regional relations between states and between the region and the US. For example, Qatar, Saudi Arabia, and the UAE have supported rebel groups in Syria against the government, which was supported by Iran. Political Islam is a threat to both monarchies in the Gulf and secular states. Non-state actors, such as Islamic State (IS) and the Kurdish Regional Government (KRG) are assuming an increasingly important role in shaping the region. Further, states such as Qatar and Turkey have undertaken their own quests to shift the existing regional balance of power in their favor through soft power deployment or new or broader international alliances. Lastly, the close strategic US-Saudi relationship, primarily based on oil and arms, is being eroded by a new economic reality and divergent foreign policy interests.

This shifting alliances and new regional order is the focus of the book, which examines the factors that significantly impact the foreign relations between the countries of the Middle East. Through multiple case studies, the essays identify the emerging trends and influences that are now dominating the political decision making and policy behavior of many key states. The contributors, both scholars and practitioners, investigate the main foreign policy challenges and debates in the various states, the changing relations and balance of power between them, and the continuing role of the United States in the Middle East.

Each chapter provides an overview of the last decade or so, before delving into the current challenges and opportunities (often in light of the US as a power with the ability to significantly impinge on state policies, and what these issues mean for the regional order. This primer on state politics and the transformative capacity of the Middle East will appeal to anyone studying the region.


1 Opportunities Lost: US Foreign Policy in the Middle East Under Bush and Obama, 2000-2014


5 Qatari Domestic and Regional Policy: Ideas at Odds with Identity


6 Turkish Regional Policy in the Modern Era: From “Zero Problems” to Few Options