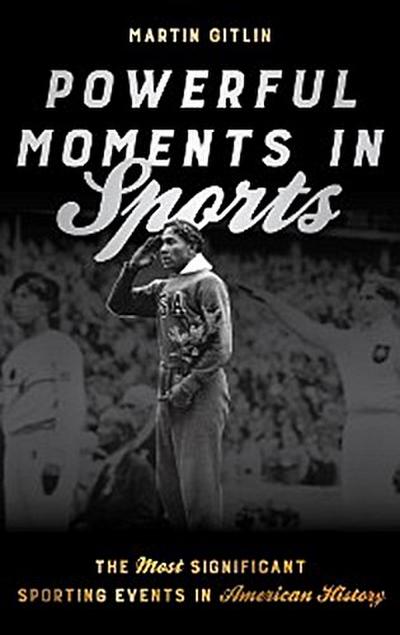 This book looks at the most important sporting events in American history, those that transcended the athletic performance itself and made an impact on culture and society. It includes achievements so legendary that they altered the course of their sport or even the nation. Powerful Moments in Sports includes such iconic events as Jackie Robinson signing with the Dodgers, Jesse Owens winning four gold medals in Nazi Germany, Billie Jean King defeating Bobby Riggs in the “Battle of the Sexes,” and more.
Jesse Owens wins four gold medals at the 1936 Olympics. Billie Jean King takes on Bobby Riggs in the Battle of the Sexes. Title IX is passed. Some moments in sports—whether they take place on a track, on a tennis court, or in a courtroom—transcend the event itself. Some have helped America live out its creed that all men are created equal. Others have pushed the nation toward gender equality. Others have changed individual sports to such a degree that they have transformed society.

Powerful Moments in Sports: The Most Significant Sporting Events in American History encompasses more than a single player, team, or game. This book looks at how a particular event revolutionized a sport, how a contest of speed inspired a nation, or even how a humble victory affected the world. Martin Gitlin considers such impactful moments as Jackie Robinson’s integration of Major League Baseball, Gertrude Ederle becoming the first female to swim the English Channel—and shattering the times of five men who had accomplished the feat before her—and the underdog US hockey team defeating the Soviets at the 1980 Olympics. The twenty events featured in this book had profound social, political, and cultural importance and inspired athletes and spectators alike.

Spanning multiple decades, Powerful Moments in Sports reveals the tremendous impact athletes have had on America—and the world—over the years. Covering football, baseball, hockey, basketball, track and field, boxing, and more, this book will fascinate and enlighten sports fans, historians, and those interested in the impact of athletic endeavors on culture and society.
Introduction


Chapter 2: Curse of the Bambino


Chapter 7: The Shot Heard ’Round the World


Chapter 15: The Battle of the Sexes


Chapter 17: Death of the Reserve Clause


Chapter 18: Magic vs. Bird Puts the Madness in March


Chapter 20: The Rise and Fall of Tiger Woods