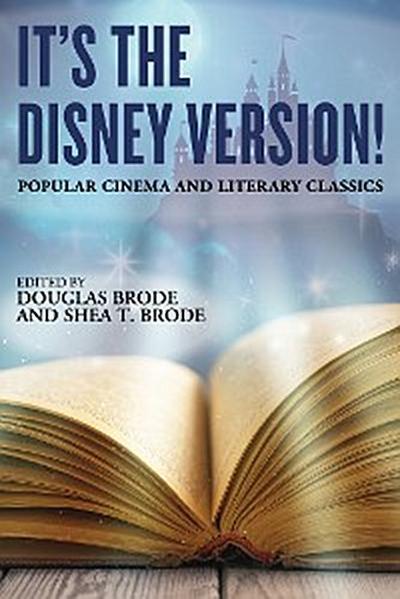 This collection of essays examine how the Disney studio has re-interpreted—for better or worse—classic literature into films both treasured and disdained. The films discussed in this volume include Bambi, The Hunchback of Notre Dame, Peter Pan, Sleeping Beauty, Snow White and the Seven Dwarfs, and Tarzan.
In 1937, the first full-length animated film produced by Walt Disney was released. Based on a fairy tale written by the Brothers Grimm, Snow White and the Seven Dwarfs was an instant success and set the stage for more film adaptations over the next several decades. From animated features like and Bambi to live action films such as Mary Poppins, Disney repeatedly turned to literary sources for inspiration—a tradition the Disney studios continues well into the twenty-first century.

In It’s the Disney Version!: Popular Cinema and Literary Classics, Douglas Brode and Shea T. Brode have collected essays that consider the relationship between a Disney film and the source material from which it was drawn. Analytic yet accessible, these essays provide a wide-ranging study of the term “The Disney Version” and what it conveys to viewers. Among the works discussed in this volume are Alice in Wonderland, Mary Poppins, Pinocchio,Sleeping Beauty, Tarzan, and Winnie the Pooh.

In these intriguing essays, contributors to this volume offer close textual analyses of both the original work and of the Disney counterpart. Featuring articles that consider both positive and negative elements that can be found in the studio’s output, It’s the Disney Version!: Popular Cinema and Literary Classics will be of interest to scholars and students of film, as well as the diehard Disney fan.