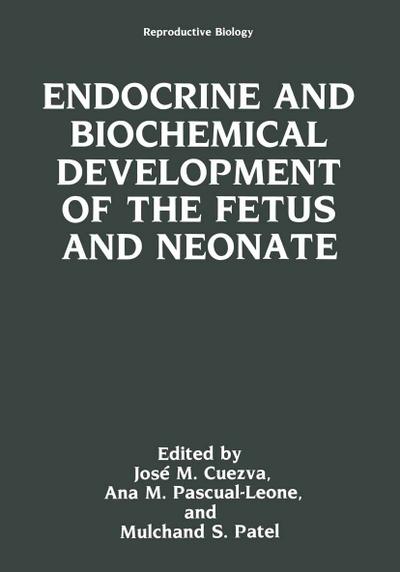 Endocrine and Biochemical Development of the Fetus and Neonate

Springer Book Archives
Endocrine and Functional Aspects of Development.- Endocrine Cytodifferentiation of the Rat Fetal Testis.- Transfer of Thyroid Hormones from the Mother to the Fetus.- Neonatal Development of the Angiotensin Converting Enzyme. Effect of Hypothyroidism.- Development of the Pancreatic B-cells: Growth Pattern and Functional Maturation.- Insulin Receptor Binding Activity in Skeletal Muscle During Pregnancy.- Insulin Binding and Receptor Tyrosine Kinase Activity in Rat Liver at Term Gestation.- Glucose Homeostasis in Suckling Rats Undernourished During Intrauterine Life.- Glucose Metabolism and Insulin Sensitivity During Suckling Period in Rats.- Maturation of the Sympathetic Nervous System: Role in Neonatal Physiological Adaptations and in Cellular Development of Peripheral Tisues.- Effect of Thyroxine and Cortisol on Brain Catecholamines in Neonatal Rats.- G-Proteins in Neonatal Liver: Ontogeny and Relationship to Activation of Adenylate Cyclase.- Postnatal Development of ?-adrenergic Receptor Kinase Activity in Different Tissues of the Rat.- Molecular and Functional Aspects of Mitochondrial Development.- Perinatal Development of Liver Mitochondrial Function.- Postnatal Mitochondrial Differentiation in the Newborn Rat.- Uncoupling Protein mRNA Expression During the Perinatal Period of the Rat.- Iodothyronine 5?-Deiodinase Activity in Brown Adipose Tissue During Perinatal Development.- Characterization of a System to Study the Uncoupling Protein Expression in Brown Adipocyte Primary Cultures.- Development and Molecular Biology of Mammalian Pyruvate Dehydrogenase Complex.- Metabolic Aspects of Development.- Fuel Supply to the Brain During the Early Postnatal Period.- Utilization of the Main Metabolic Substrates by Freshly Isolated Cells from the Fetal Rat Brain.- The Use of Primary Culture of Astrocytes to Study Glial Development. Effect of Ethanol.- Regulation of Protein Synthesis During Brain Development. Role for Initation Factor 2.- Lipid Metabolic Interactions in the Mother During Pregnancy and Their Fetal Repercussions.- Surfactant Lipids and Proteins in the Perinatal and Adult Lung.- Effect of Maternal Diabetes on Fetal Lung Maturation.- Lipoprotein Lipase in Newborn Rat Liver: Cellular Localization and Site of Synthesis.- Long-Term Consequences of High Carbohydrate Intake During the Suckling Period on Lipid Synthesis in the Adult Rat.- Fetal-Placental Interactions in the Control of Prenatal Growth.- Fetal/Maternal Plasma Amino Acid Relationships in the Streptozotocin Diabetic Rat.- Effect of Physiological Changes in Cystathionase Activity on Amino Acid and Glutathione Metabolism in Rat Fetus.- Amino Acid Uptake by Liver in Pregnant and Lactating Rats.- Regulation of the Urea Cycle During Lactation.- Ontogenesis of Copper and Zinc Carriers in Rat Plasma.- Participants and Contributors.
The annual meeting of the Perinatal Biochemical Group of the Spanish Biochemical Society held in Madrid on December 15-16, 1989, provided an excellent opportunity to bring together a group of distinguished investigators both from Spain and from abroad with a common interest in developmental endocrinology and biochemistry. The aim of the symposium was to present and discuss the most recent developments in the areas of endocrine and biochemical processes critical to normal growth and maturation of the newborn. To achieve a high degree of interaction among the participants, subject reviews as well as short communications were include in the program. The reviews provided in-depth information on selected important topics. The purpose of short communications was two fold: (i) to provide a forum to discuss on-going investigations on related areas; and (ii) to present opportunities for active participation by young investigators. This format proved very successful in generating fruitful discussions among the participants. Taken together the review chapters and the short communications have resulted in a coherent and unified subject presentation. Advances in biochemistry, molecular biology and cell biology have provided not only new and exciting experimental approaches but also have opened up new directions in the investigation of differentiation and developmental processes at cellular, molecular and biochemical levels during the early stages of growth and maturation. In recent years a wealth of information in these areas of development has emerged at a rapid rate.