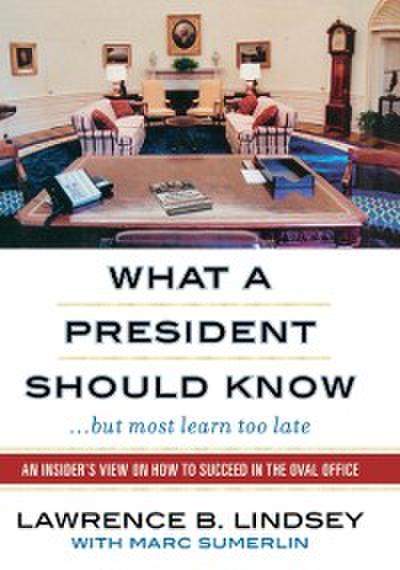 What a President Should Know

In dual briefings to the American public and the next occupant of the Oval Office, this book provides intriguing insight into the process of creating and managing the government and outlines what the most likely issues confronting the next president will be and how the president should respond.
The winner of the presidential election will need to get quickly up-to-speed on how to manage the government. What are the likely issues he will encounter on the first day in the Oval Office? What does he do about the cost of the Iraq War? He'll get blamed if there's another terrorist attack, so what does he need to do that first day and the days and weeks to come to realistically and prudently prevent such an attack? How's the economy? What kind of policies can he now really propose based upon the present state of the economy and the tax-base that supports federal programs? He promised during the campaign to tackle big issues like healthcare, education, energy, immigration, international trade, and taxation. If he's going to hold himself to his own campaign rhetoric then he'd better surround himself with political savvy, fiscally astute advisers—like Lindsey and Sumerlin. This book is for the next president of the United States, all the policy-makers-in-waiting, and, most importantly, political junkies who appreciate that these authors were Oval Office advisors and that they understand what it takes to get a new administration up-and-running.
Chapter 1. Inside the Oval, Again
Chapter 2. The Corrupting Walls of the West Wing

Chapter 5. Are We Ready for Another Dark Day?

Chapter 6. At the Helm of the Economy

Chapter 7. A World of Porous Borders

Chapter 9. The Reaction to Fear Itself

Chapter 10. The End of the Line