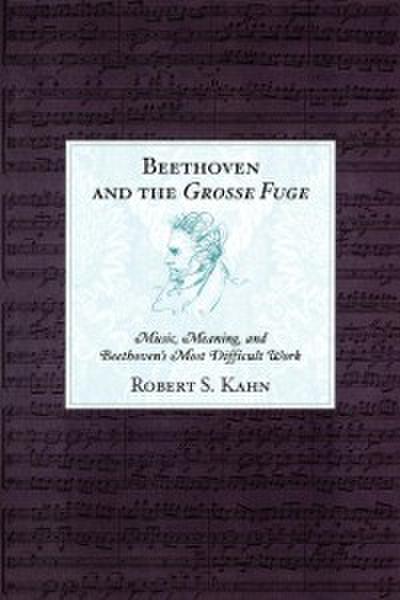 Beethoven and the Grosse Fuge

This book looks closely at both Beethoven and the Grosse Fuge, placing both in their historical and social contexts. It considers interesting questions about whether absolute music—music without words—can have meaning and speculates that some works of Western music can evoke synesthesia in listeners—a sense of motion through three-dimensional volumes of space. The author also speculates that Beethoven's long creative dry spell in his late 40s was caused by an extended bout with clinical depression.
The Grosse Fuge, composed by Ludwig van Beethoven in his late period, has an involved and complicated history. Written for a string quartet but published as an independent work, the piece raises interesting questions about whether music without words can have meaning, and invokes speculation about the composer and his frame of mind when he wrote it. Kahn looks closely at the musical, aesthetic, philosophical, and historical problems the work raises, considering its history, structure and development, meaning, and response among critics and contemporaries. Kahn also studies Beethoven's difficulties with publishers and sponsors, his everyday life, and his character in light of recent advances in the pharmacology of depressive illness.

The book places both Beethoven and the Grosse Fuge in their historic and social contexts, arguing that Beethoven intended the Fuge as the finale of his String Quartet Opus 130 and created a substitute finale for the quartet at his publisher's urging; not because he was unhappy with the work. Beethoven is examined as a freelance musician: a vocation whose members were frequently excluded from society and the protection of its laws, including respect for copyright. Viewed in this light, Beethoven's famous quirks and resentments become understandable, even rational. Kahn also devotes a chapter to the phenomenon of synesthesia—a sense of motion through three-dimensional volumes of space—examining how some works of Western music can evoke synesthesia in listeners. He also speculates that Beethoven's creative dry spell in his late 40s was caused by an extended bout with clinical depression. Written for a general audience and including a bibliography and index, this fascinating study will interest scholars and fans of classical music and Beethoven.