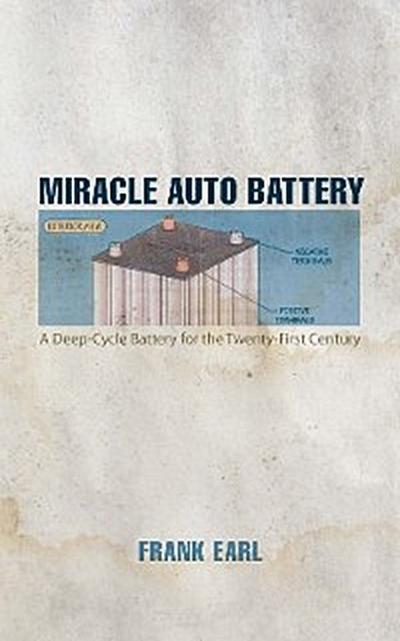 With each passing day, the planet grows closer to peak oil, the point at which our ability to extract petroleum enters its terminal decline. Equally troubling is that our dependence on foreign oil has left us beholden to many of the most ruthless, most despotic nations on earth. Scientists have searched for alternative fuel sources, but even after decades of research, efforts to increase the efficiency and overall capacity of the deep-cycle battery for electric vehicles have been largely unsuccessful.
Miracle Auto Battery argues that we have simply been searching in the wrong place. Unlike much of the existing research into automotive battery technology that is preoccupied with the chemical structure of the battery, Miracle Auto Battery focuses on the mechanical structure of the deep-cycle battery.

Author Frank Earl proposes that to unlock the future of battery technology, we may need to first look to the past. In 1859, a French scientist named Gaston Plant combined a chemical and a mechanical solution to create the secondary cell (rechargeable) battery. Miracle Auto Battery suggests that by expanding on Plants mechanical solution and adding an additional terminals to the secondary cell battery, we could simultaneously charge and discharge the batterysimilar to a run capacitor in an Ac circuit. The ability to charge the deep-cycle battery at will would revolutionize the electric vehicle and end our dependence on foreign oil forever.