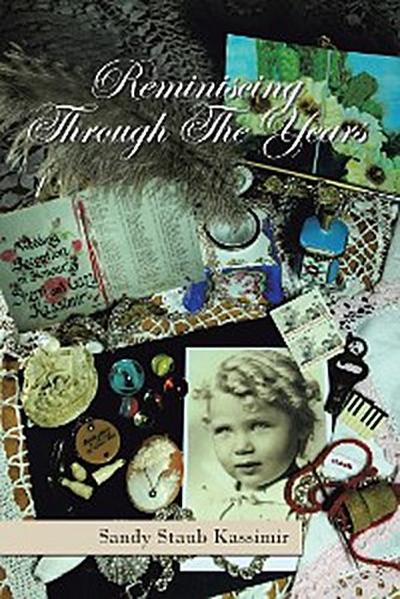 Reminiscing Through the Years

Reminiscing Through The Years is a book of laughter, tears, and life Sandy Staub Kassimirs life to be exact. She begins the journey with the story of her parents childhoods, along with the struggles they encountered when they came to America. She takes us through their courtship; sharing the loving details of how they met and fell in love. She also shares the story of her romance with her husbanda romance that began at the age of eighteen. Over the years they have welcomed their wonderful children and then, with time, their grandchildren into their lives.
Sandy has been fortunate to meet many wonderful friends along the way. She tells the stories of people who have touched her life in some way, with honesty, warmth, and humor. Sandy has included the stories of her travels which have been a particular joy for her to relive. Throughout the book she expresses herself with great tenderness and frankness that anyone can appreciate.

Among the 211 stories in the book, there were two sisters and a cousin whose stories made front page headlines world-wide.

The Triangle Shirtwaist Factory Fire
In 1911 my great maternal aunt was caught in that fire when she was a teenager. She barely survived. Her entire back was burned, and she could not bend her body. I never saw her sit. Her sister was in the Plague of 1918.

The Plague of 1918
The Influenza Plague in Europe killed my maternal grandmother in Poland. My mother was only seven years old at the time.

The Klinghoffer Murder
In 1985 Leon Klinghoffer was murdered on the Achille Lauro ship. He was shot in his wheelchair and thrown overboard. He was my fathers cousin.

Reminiscing Through the Years was written to enlighten Sandys children and grandchildren about her origin and her experiences through the years.