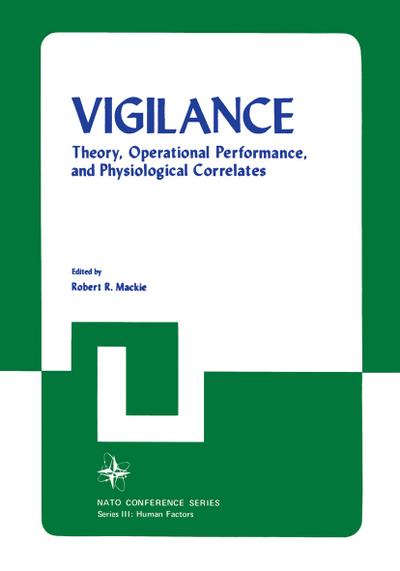 Springer Book Archives
1: Introduction.- 2: Vigilance: Biology, Psychology, Theory, and Practice (Keynote Address).- 3: Performance Decrement During Prolonged Night Driving.- 4: Validation of a Behavior Analysis Methodology: Variation of Vigilance in Night Driving as a Function of the Rate of Carboxyhemoglobin.- 5: Effects of Listening to Car Radio, Experience, und Personality of the Driver on Subsidiary Reaction Time and Heart Rate in a Long-Term Driving Task.- 6: Comparison of Performance and Physiological Changes Between Drivers Who Perform Well and Poorly During Prolonged Vehicular Operation.- 7: Circadian Performance Rhythms: Experimental Studies in Air Operations.- 8: Fatigue, Circadian Rhythm, and Truck Accidents.- 9: Neurophysiological Vigilance Indicators and Operational Analysis of a Train Vigilance Monitoring Device: A Laboratory and Field Study.- 10: Simultaneous Monitoring of a Number of Auditory Sonar Outputs.- 11: Concurrence of Electroencephalographic and Performance Changes During a Simulated Radar Watch and Some Implications for the Arousal Theory of Vigilance.- 12: Physiological, Subjective, and Performance Correlates of Reported Boredom and Monotony While Performing a Simulated Radar Control Task.- 13: The Function of Maintaining Concentration (TAF): An Approach to the Evaluation of Mental Stress.- 14: Vigilance Effects in Complex Inspection.- 15: Some EEG Correlates of Sustained Attention.- 16: Cortical Evoked Potentials and Vigilance: A Decision Theory Analysis.- 17: Physiological Correlates of Performance in a Long Duration Repetitive Visual Task.- 18: The Effects of Various Conditions on Subjective States and Critical Flicker Frequency.- 19: Vigilance and Split-Brain Research.- 20: Effects of Temporal Stressors on Vigilance and Information Processing.- 21: Arousing Stresses Increase Vigilance.- 22: Biorhythm and Watch Rhythms: Hemeral Watch Rhythm and Anhemeral Watch Rhythm in Simulated Permanent Duty.- 23: Sleep Deprivation and the Vigilance of Anesthesiologists During Simulated Surgery.- 24: Sleep Deprivation, Arousal, and Performance.- 25: A Study of the Combined Effects of Extended Driving and Heat Stress on Driver Arousal and Performance.- 26: A Taxonomic Analysis of Vigilance Performance.- 27: The Relationship Between Vigilance and Eye Movements Induced by Vestibular Stimulation.- 28: The Effect of Mental Set and States of Consciousness on Vigilance Decrement: A Systematic Exploration.- 29: The Influence of Personality and Age on the Relationship Between Vigilance Performance and Arousal Level.- 30: Psychological Processes in Sustained Attention.- 31: The Effects of Raised Signal and Noise Amplitude During the Course of Vigilance Tasks.- 32: Experiments on the Validity of Vigilance Experiments.- 33: Adaptation to Decreasing Signal Probability.- 34: Signal Detection Theory Applied to Vigilance.- 35: An Update of Findings Regarding Vigilance and a Reconsideration of Underlying Mechanisms.- Participants.- Author Index.
This volume contains the proceedings of a symposium held in St. Vincent, Italy, on August 3-6,1976, entitled "Vigilance II: Relationships Among Theory, Physiological Correlates, and Opera tional Performance." The symposium was sponsored jointly by the Human Factors Panel of the Scientific Affairs Division of NATO and by the Physiology Programs Office of the U.S. Office of Naval Research (Contract N00014-76-C-0722). These sponsorships, and the helpful assistance of Dr. Donald P. Woodward and Dr. John A. Nagay, are gratefully acknowledged. Following the editor's introduction, the papers appear in the order they were given at St. Vincent. In general they are grouped according to the main topical themes of the symposium: keynote ad dress, vehicle operation, monitoring and inspection, physiological correlates, stress effects, individual differences, and theoretical considerations. I must point out, however, that individual papers often overlapped several of these topical areas and thus no defini tive partitioning of the proceedings has been attempted. I wish to acknowledge the many contributions of my colleague, Dr. James O'Hanlon, to both the planning of the symposium and the preparation of the manuscript, and the invaluable role of my wife, Shirley Jean, in making the symposium such a pleasant one for all. In addition, I wish to recognize the countless contributions of Lynda Lee Chilton and Katherine Peimann whose performance in compos ing, typing, and proofing the manuscript is certainly a tribute to human vigilance, and endurance as well.