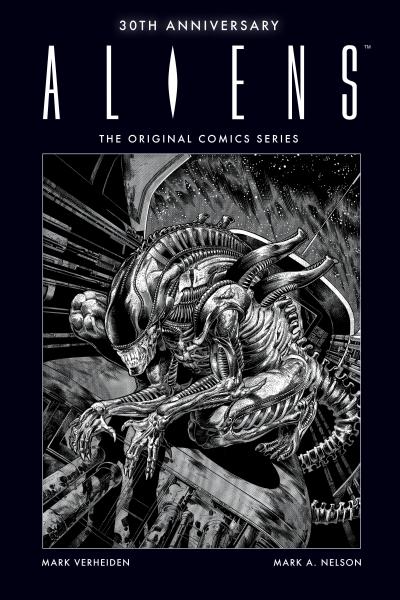 Mark is currently executive producer on Constantine for NBC and writer on the feature Children of Paranoia for CBS Films. Previous TV work including Hemlock Grove, Falling Skies, Battlestar Galactica, Heroes, Smallville, The Strip, Time Cop (The Series), Caprica, Freaklylinks, Martial Law, and Perversions of Scoience. Screenwriter on #1 boxoffice movies  Timecop and The Mask, and the not #1 but still fun feature My Name is Bruce starring Bruce Campbell. He has also put out nearly 125 comic books including The American, Aliens, Predator, The Phantom, Superman and Superman/Batman.
In 1986, James Cameron's Aliens brought to theaters the horrors of a new kind of war against a terrifying enemy. Two years later, Dark Horse Comics released a direct follow-up to the events in the film. Years before any talk of a film sequel, the comics series took fandom by storm, selling hundreds of thousands of copies.


Though the story was subsequently rendered noncanonical by the film Alien 3, the stunningly detailed art by Mark A. Nelson and the seminal script by Mark Verheiden (who went on to write The Mask, Timecop, Battlestar Galactica, Daredevil, and many other films and television shows) continued to grip readers' imaginations for years afterward. For the thirtieth anniversary of Aliens, Dark Horse is releasing an oversized hardcover edition of the unabridged and unadulterated series, in its original stark black and white!