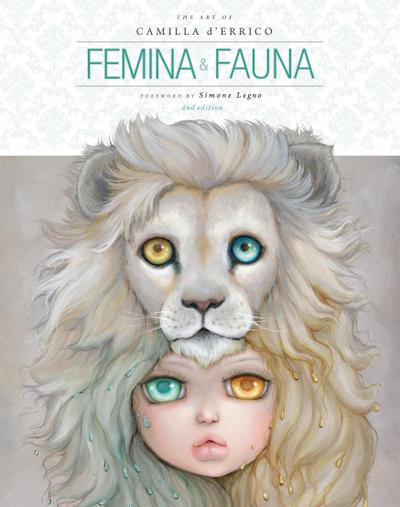 FEMINA & FAUNA THE ART OF CAMI

Camilla d'Errico is a first-generation Canadian, born in Ottawa, Ontario. Her Italian parents immigrated to Canada before she was born. From a young age her early interests included Saturday morning cartoons, comics, manga, and doodling fantasy elements in her textbooks. Camilla d'Errico's career as a painter began in 2006, when she participated in shows at Vancouver's Ayden Gallery in Gastown. Since early 2007, d'Errico has been showing her work in galleries across the United States and Canada, in Los Angeles, New York, San Francisco, Chicago, and Vancouver in what is known as the Lowbrow art movement. She is among the group of female artists, including Audrey Kawasaki and Amy Sol, who paint beautiful young girls in the pop surrealism category. With her work on Helmetgirls, d'Errico expanded upon the concept of headgear to include animals of all kinds, intertwining and juxtaposing her stylized, fantasy girls with lifelike animals. Her girls are unusually stunning, doe-eyed, and magnificently colorful female characters. The author lives in Vancouver, Canada.
Dark Horse is proud to present Femina and Fauna: The Art of Camilla d'Errico--now back in print in an improved and updated second edition! Originally published in 2011, the highly sought-after first edition became the initial volume in a series of books showcasing the captivating artwork of superstar artist Camilla d'Errico, whose singular passion and extraordinary creative talents have taken her career into the heights of such diverse realms as comic book and manga art, pop surrealist painting, fashion, toy design, video games, feature films, and more! This revised volume features a new foreword by the creator of the Tokidoki brand, Simone Legno, a new introduction by d'Errico herself, and a selection of additional art unique to this edition. It's a must-have for all fans of pop and fine art alike! • Back in print, in a revised and updated second edition! • A new cover, a new introduction by the artist, and new artwork not seen in the first edition! • Foreword by Simone Legno, creator of the Tokidoki brand! "Through her fiery nature, creative ability, and passion for her craft, Camilla d'Errico has become one of the best of her generation and a true inspiration." --Format Magazine