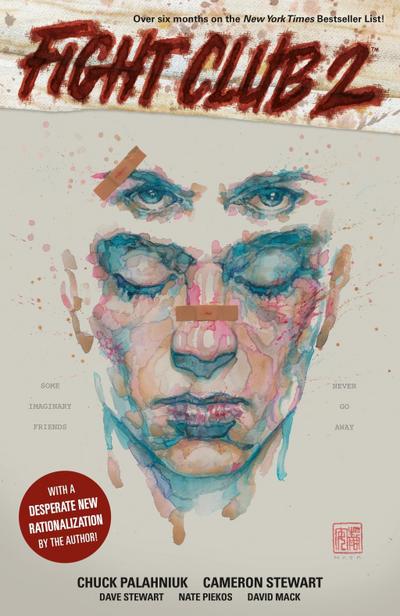 Chuck Palahniuk's ten previous novels are the bestselling Fight Club, which was made into a film by David Fincher; Survivor; Invisible Monsters; Choke, which was made into a film by director Clark Gregg; Lullaby; Diary; Haunted; Rant; Snuff; and Pygmy. He is also the author of Fugitives and Refugees, a nonfiction profile of Portland, Oregon, published as part of the Crown Journeys series, and the nonfiction collection Stranger Than Fiction. He lives in the Pacific Northwest.
Fight Club 2 is available exclusively as a Graphic Novel!Some imaginary friends never go away . . .Ten years after starting Project Mayhem, he lives a mundane life. A kid, a wife. Pills to keep his destiny at bay. But it won't last long, the wife has seen to that. He's back where he started, but this go-round he's got more at stake than his own life.The time has arrived . . .Rize or Die. New York Times bestselling novelist Chuck Palahniuk and acclaimed artist Cameron Stewart have collaborated for one of the most highly anticipated comic book and literary events-the return of Tyler Durden. The first rule of Fight Club 2 might be not to talk about it, but Fight Club 2 is generating international headlines and will introduce a new generation of readers to Project Mayhem. Praise for the comics that comprise Fight Club 2: "At turns deeply poignant and very funny, Palahniuk's freakish fables capture a twisted zeitgeist and add an oddly inspirational and subversive voice to the contemporary canon…. In the post-9/11 present, a hyperactive, Internet-obsessed, war- and recession-weary America apparently needs Tyler again."-THE ATLANTIC"The book is fantastic, my highest recommendation.... Excellent work by Cameron Stewart and David Mack, and by our awesome friends at Dark Horse Comics."-Brian Michael Bendis"If Tyler Durden needed a resurgence, there's no time like the present for his return… Fight Club 2 is a comic that taps back into everything great about the source material, and one that makes Tyler Durden's warm nihilistic embrace a welcome draw back into a familiar world of cynicism, violence, and anarchy...."Tyler Lives," and I couldn't be happier by the prospect of more bedlam."-NEWSARAMA"Palahniuk is delivering a worthy sequel to his most beloved story."-THE NERDIST"Entertaining."-COMIC BOOK RESOURCES"Excellent."-THE BEAT"An amazing piece of work. You do not want to miss out on this."-COMICVINE"Perfect."-FORCES OF GEEK"We have a worthy sequel on our hands…. A must read."-COMICOSITY"Cameron Stewart truly outdoes himself on every level in this book."-BLOODY DISGUSTING"Clever and beautiful."-COMICS ALLIANCE