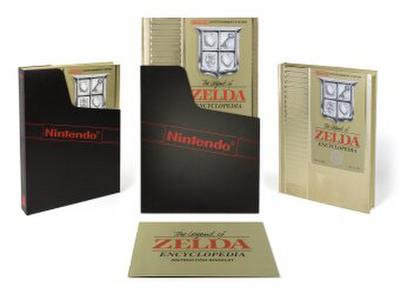 Nintendo is a Japanese video game company founded in 1985. The Nintendo Entertainment System (NES) is given credit for revolutionizing the home gaming experience. A few years later, the Gameboy and the Super Nintendo cemented Nintendo as one of the premier gaming companies in the world. With iconic characters such as Mario, Link, Luigi, Donkey Kong, and Kirby, Nintendo has solidified itself as a true force in video game community.
The Legend of Zelda(TM) is one of the most successful franchises of all time with nearly twenty video games and thirty years of history, but it all started with a gold cartridge...

The Legend of Zelda Encyclopedia Deluxe Edition honors the game that started it all by recreating the original gold cartridge as faithfully as possible. The book comes with a black polypropylene sleeve, lined with velvet flocking, and a scale instruction booklet with fun, theme-appropriate material inside.

The cover is a gold foil paper with gloss lamination and a spot gritty varnish. The details are embossed and debossed. It has gold gilding on the top and foredge, with black gilding on the bottom. This book looks and feels so much like the original cartridge you might find yourself blowing into the bottom before you open it!

This 328-page book is an exhaustive guide to The Legend of Zelda, from the original The Legend of Zelda to Twilight Princess HD. A comprehensive collection of enemies and items, potions to poes, an expansion of the lore touched upon in Hyrule Historia, concept art, screencaps, maps, main characters and how they relate, languages, and much, much more, including an exclusive interview with Series Producer, Eiji Aonuma! This, the last of The Goddess Collection trilogy, which includes Hyrule Historia and Art & Artifacts, is a treasure trove of explanations and information about every aspect of The Legend of Zelda universe!

Celebrate over thirty years of The Legend of Zelda with a heartfelt homage to the origins of this legendary franchise!