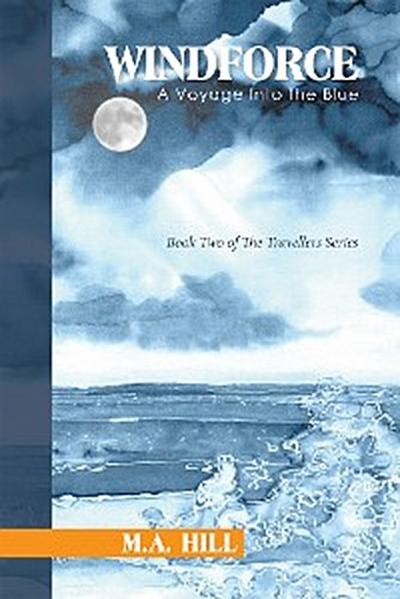 WINDFORCE: a voyage into the blue. By M.A.HillBook two of The Travellers Trilogy

'You can't beat against the force of the wind forever - sometimes you must just run before the gale even though it may end in shipwreck.'

Storms of the Indian Ocean course up the coast of Western Australia in winter - saltwater sailor and Master Mariner Gretta Finneson is on a desperate solo voyage in Vagabond, a vintage racing yacht. She must complete the passage to save a dolphin and whale watch charter in the pristine wildlife sanctuary at Shark Bay from development and destruction by powerful Chance Syndicates. Time and the odds are against her.

The freedom of those who travel these trackless horizons of windswept oceans and the lonely outback is endangered, and it seems that failure is inevitable. Fellow Traveller, landscape artist Aidan Randell, cannot help her for he is tied to the fragile musician Zelina who is beset by floods and bushfires in her southern forest sanctuary.

Adventurer, poet, and artist M.A. Hill is a unique voice in Australian literature, and she tells a powerful story that mirrors the relentless battle for the survival of our world's wild places. As the plot unravels in this second novel of The Travellers Trilogy, the diverse characters populate a landscape that is at once original yet familiar.

The first novel, 'Trackless; a journey that follows no trails,' was praised as 'a compelling read' (Cockburn Gazette) 'a work of sheer literary genius' and 'one of the best books I've ever read.'

The final tale, 'Setback: a passage through the dark,' will be released soon.
If you read Tim Winton, you will enjoy the work of M.A.Hill. Her prose is lyrical, and her storytelling overlays many dimensions of reality.