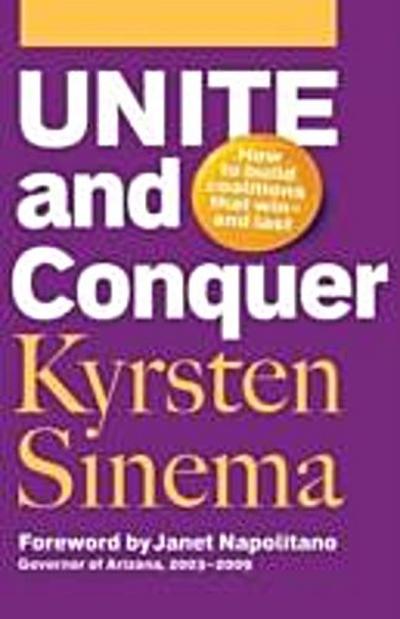 Progressives have been using divide-and-conquer tactics stolen from conservatives to further their own cause with limited success. This is because such tactics go against everything progressives believe in, and there is no logic or power in trying to use bad strategies to get to a good place. Legislator Krysten Sinema shows how the future of the progressive movement is to be found in unity, alignment and partnership and moving away from being entrenched in identity politics and sub-agendas.
Old-school divide-and-conquer tactics—demonizing opponents, frightening voters, refusing to compromise—may make us feel good about the purity of our ideals, but it's no way to get anything done. Worse, this approach betrays some of the most cherished ideals of the progressive movement: inclusion, reason, justice, and hope. Illuminated by examples from her own work and a host of campaigns across the country, Kyrsten Sinema shows how to forge connections—both personal and political—with seemingly unlikely allies and define our values, interests, and objectives in ways that broaden our range of potential partners and expand our tactical options. With irreverent humor, enthralling campaign stories, and solid, practical advice, Sinema enables us to move past “politics as war” and build support for progressive causes on the foundation of our common humanity.
Foreword by Janet Napolitano
Preface
Introduction: Because You Can't Get There On Your Own
Chapter 1: The Politics We Want
Chapter 2: Letting Go of the Bear and Picking Up the Buddha
Chapter 3: Creating Coalitions You Actually Want to Join
Chapter 4: Shedding the Heavy Mantle of Victimhood
Chapter 5: Making Friends
Chapter 6: Letting Go of Outcomes
Chapter 7: Getting Back to Our Shared Values
Chapter 8: Naming Our Interests
Chapter 9: The Third Way
Chapter 10: And, Not But
Chapter 11: Keeping the Team Together
Conclusion: Get Your Coalition On
Bonus Resource: The Coalition Builder's Toolkit
Notes
Acknowledgments
Index
About the Author
Too many progressives are still using old-school divide-and-conquer tactics: demonize the other side, frighten the voters, scheme, and maneuver to try to win on your own terms. This approach hasn’t been particularly successful and has led to widespread alienation and apathy, which plays into the hands of the status quo. And it’s a betrayal of some of the most cherished ideals of the progressive movement: inclusion, reason, justice, and hope.
This is starting to change, but old habits die hard. Nobody is better positioned to help than Kyrsten Sinema. Sinema was a leader in the successful fight against banning gay marriage in 2006 and in the effort to divest state funds in Darfur—unexpected victories in a traditionally conservative state. In Unite and Conquer, Sinema shares how we can put together broad-based coalitions that advance the progressive agenda rather than simply make us feel good about the purity of our ideals.

Sinema argues that we must let go of our preconceived notions about who our opponents are, how they think, what specific outcomes we’re aiming for, even our notions of who we are—identity politics have bred insularity and intolerance and closed us off from creating winning alliances and strategies. Using her experiences and examples from a host of campaigns from all over the country, she offers specific advice on how to forge connections—personal and political—with seemingly unlikely allies and define our values, interests, and objectives in ways that broaden our range of potential partners and expand our tactical options.

We have to learn to think “and,” not “but,” she says. Sinema shows readers how to move past politics as war and create support for progressive causes by discovering and emphasizing our common humanity.