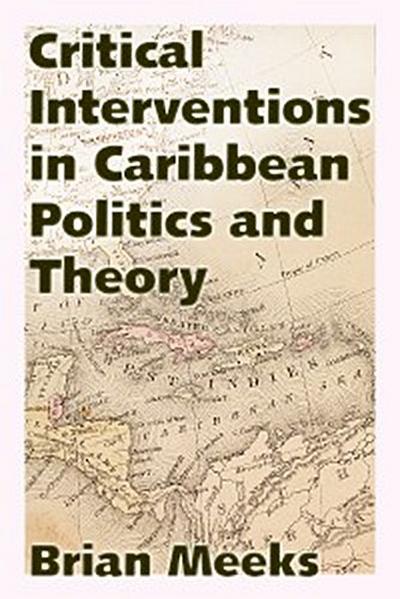 A well-known public intellectual's intense engagement with politics in the contemporary Caribbean
These essays by Brian Meeks, a noted public intellectual in the Caribbean, reflect on Caribbean politics, particularly radical politics and ideologies in the postcolonial era. But his essays also explain the peculiarities of the contemporary neo-liberal period while searching for pathways beyond the current plight.

In the first chapters, titled “Theoretical Forays,” Meeks makes a conscious attempt to engage with contemporary Caribbean political thought at a moment of flux and search for a relevant theoretical language and style to both explicate the Caribbean’s recent past and confront the difficult conditions of the early twenty-first century. The next part, “Caribbean Questions,” both retrospective and biographical, retraces the author’s own engagement with the University of the West Indies (UWI), the short-lived but influential Caribbean Black Power movement, the work of seminal Trinidadian thinker and activist Lloyd Best, Cuba’s relationship with Jamaica, and the crisis and collapse of the Grenadian Revolution.

As evident in its title, “Jamaican Journeys,” the concluding section excerpts and extracts from a longer, more sustained engagement with Jamaican politics and society. Much of Meeks’ argument builds around the notion that Jamaica faces a crucial moment, as the author seeks to chart and explain its convoluted political path and dismal economic performance over the past three decades. Meeks remains surprisingly optimistic as he suggests that despite the emptying of sovereignty in the increasingly globalized world, windows to enhanced human development might open through policies of greater democracy and popular inclusion.