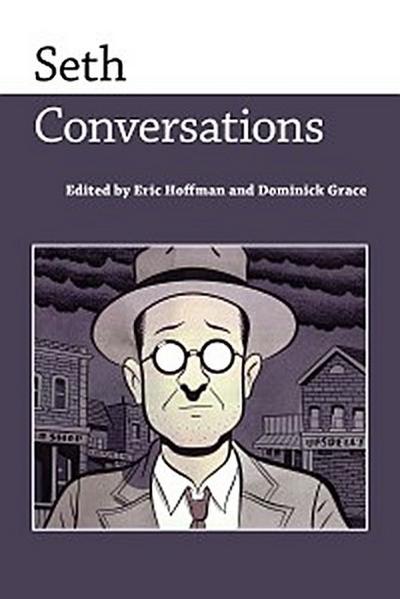 Interviews with the cartoonist who created
It's a Good Life, If You Don't Weaken;
Clyde Fans; and
Wimbledon Green
Canadian cartoonist Gregory Gallant, pen name Seth, emerged as a cartoonist in the fertile period of the 1980s, when the alternative comics market boomed. Though he was influenced by mainstream comics in his teen years and did his earliest comics work on Mister X, a mainstream-style melodrama, Seth remains one of the least mainstream-inflected figures of the alternative comics' movement. His primary influences are underground comix, newspaper strips, and classic cartooning.

These interviews, including one career-spanning, definitive interview between the volume editors and the artist published here for the first time, delve into Seth's output from its earliest days to the present. Conversations offer insight into his influences, ideologies of comics and art, thematic preoccupations, and major works, from numerous perspectives—given Seth's complex and multifaceted artistic endeavors. Seth's first graphic novel,
It's a Good Life, If You Don't Weaken, announced his fascination with the past and with earlier cartooning styles. Subsequent works expand on those preoccupations and themes.
Clyde Fans, for example, balances present-day action against narratives set in the past. The visual style looks polished and contemplative, the narrative deliberately paced; plot seems less important than mood or characterization, as Seth deals with the inescapable grind of time and what it devours, themes which recur to varying degrees in
George Sprott, Wimbledon Green, and
The Great Northern Brotherhood of Canadian Cartoonists.