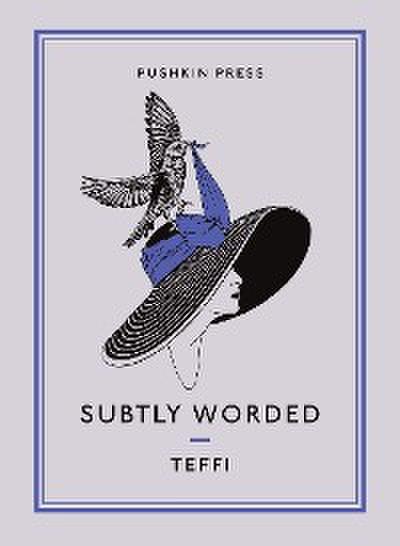 SUBTLY WORDED AND OTHER STORIES

A selection of the finest stories by this female Chekhov, Teffi's genius with the short form made her a literary star in pre-revolutionary Russia, beloved by Tsar Nicholas II and Vladimir Lenin alike. These stories, taken from the whole of her career, show the full range of her gifts. Extremely funny - a wry, scathing observer of society - she is also capable, as capable even as Chekhov, of miraculous subtlety and depth of character. There are stories here from her own life (as a child, going to meet Tolstoy to plead for the life of War and Peace's Prince Bolkonsky, or, much later, her strange, charged meetings with the already-legendary Rasputin). There are stories of society, its members held together by mutual repulsion. There are stories of people misunderstanding each other or misrepresenting themselves. And throughout there is a sly, sardonic wit and a deep, compelling intelligence. Teffi was a phenomenally popular writer in pre-revolutionary Russia - a favourite of Tsar Nicholas II and Vladimir Lenin alike. She was born in 1872 into a prominent St Petersburg family and emigrated from Bolshevik Russia in 1919. She eventually settled in Paris, where she became an important figure in the literary scene, and where she lived until her death in 1952. A master of the short form, in her lifetime Teffi published countless stories, plays and feuilletons. After her death, she was gradually forgotten, but the collapse of the Soviet Union brought about her rediscovery by Russian readers. Now, nearly a century after her emigration, she once again enjoys critical acclaim and a wide readership in her motherland.