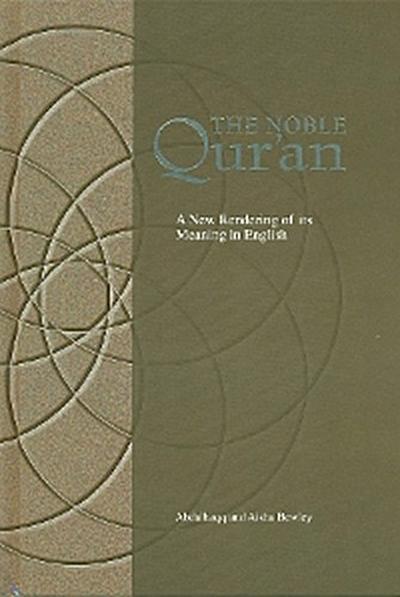 The Noble Qur'an - a New Rendering of its Meaning in English is a translation which is easy to read and gives easy access to the meanings of the original Arabic without compromising or obscuring them in any way. In short, it is a new rendering of its meaning which is not only trustworthy but also a pleasure to read. Fortunately Hajj Abdalhaqq and Aisha Bewley are not only scholars but they have been also practising Muslims as well as prolific translators for almost four decades. In addition, they have been guided, as they humbly acknowledge in their Preface, by what has been transmitted as regards the meanings of the Qur'an by "the great mufassirun (commentators) of the past who spent so much time and energy in unearthing, preserving and passing on the meaning of Allah's Book and in protecting it from unacceptable interpretation and deviation."
Translated by Shaykh Abdalhaqq and Aisha Bewley

Shaykh Abdalhaqq accepted Islam in 1968 and spent some years in Morocco learning about Islam. Since that time he has worked on the establishment of Islam and Muslim communities, in the process living and teaching in Nigeria, the US, Czechoslovakia, Germany, Spain, the Caribbean, and the UK. He is the author of Zakat: Raising a Fallen Pillar and Islam, its Basic Practices and Beliefs. He currently resides and teaches in Norwich.

Aisha Abdurrahman at Tarjumana Bewley is one of today's most prolific translators of classical Arabic works into English. For more than thirty-five years she has been concerned with making the contents of many classical Arabic works more accessible to English-speaking readers. She is co-translator of The Noble Qur'an A New Rendering of its Meaning in English. Other works include Al-Muwatta of Imam Malik, A Glossary of Islamic Terms, Islam: The Empowering of Women and Muslim Women, a Biographical Dictionary.

"This new translation of the Qur'an immediately outdates all the others in the English-speaking world. The result of over twenty-five years of detailed study of the Qur'anic text, the Bewley translation has the advantage of high quality, naturally fluent English, along with the benefit of access to the traditional understanding of the text."

"Abdalhaqq and Aisha Bewley's (translation) has, perhaps, the potential of setting new standards in this discipline... For those who want to familiarise themselves with the content of the Qur'an, this is the ideal translation to start with."