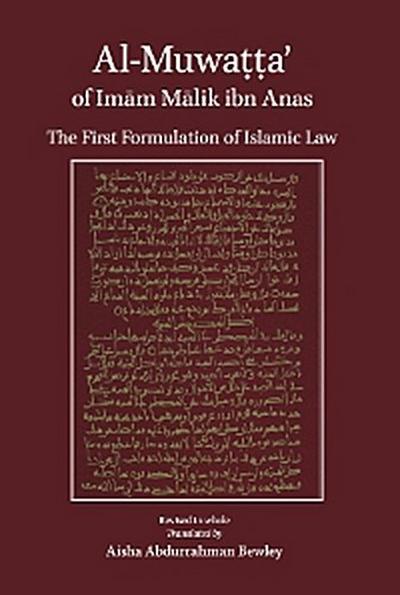 The first formulation of Islamic Law based on the behaviour of the people of Madinah during the time of the Prophet, may Allah bless him and grant him peace, and the great Companions, Al-Muwatta is the blueprint for a just and radiant society: the earliest, clearest, cleanest record of salafi Islam. It is the first of the sahih works, long pre-dating al-Bukhari and Muslim.
In addition, the Muwaṭṭa' contains a record of the practice ('amal) of the people of Madīnah of the first generations, a transmission of the ethos that permeated the city, and Imām Mālik's painstaking clarification of the Sunna, the ḥadīths, the practice and legal judgements.

Imam Mālik's (93 AH/711 CE - 179 AH/795 CE) full name is Mālik ibn Anas ibn Mālik ibn Abī 'Āmir al-Aṣbaḥī and he was related to Dhū Aṣbaḥ, a sub-tribe of Ḥimyar. He was instructed in the learning and recitation of the Noble Qur'ān by Imām Nāfi' ibn 'Abd ar-Raḥmān ibn Abī Nu'aym, the Imām of the reciters of Madīna and one of the 'seven reciters'.
Among the huge number of his teachers in ḥadīth and fiqh were Nāfi', the mawlā of 'Abdullāh ibn 'Umar, and Ibn Shihāb az-Zuhrī. He sat to give fatwā when he was seventeen years old after seventy Imāms had testified that he was worthy to give fatwā and teach.
His own students included Imām ash-Shāfi'ī and Imām Muhammad ibn al-Ḥasan ash-Shaybānī the Ḥanafī mujtahid, as well as a great number of Imāms of ḥadīth and fiqh, and thus he is known as Imām al-A'immah 'the Imām of the Imāms'.
He is recognised to be the subject of the hadith from Abū Hurayra: "The Messenger of Allah, peace be upon him said, 'There will come a time when the people will beat the livers of their camels in search of knowledge and they will not find an 'ālim with more knowledge than the 'ālim of Madīna.'"

Aisha Abdurrahman Bewley is one of today's most prolific translators of classical Arabic works into English. For more than thirty-five years she has been concerned with making the contents of many classical Arabic works more accessible to English-speaking readers.
She is co-translator, with her husband Shaykh Abdalhaqq Bewley, of The Noble Qur'an, a New Rendering of its Meaning in English.
Other works include her translation of The Meaning of Man of Sidi Ali al-Jamal, Muhammad Messenger of Allah - ash-Shifa of Qadi 'Iyad, Muhammad ibn Sa'd's Kitab at-Tabaqat al-Kabir, and of her own authorship: Mu'awiya - Restorer of the Muslim Faith, A Glossary of Islamic Terms, Islam: The Empowering of Women and Muslim Women, a Biographical Dictionary.