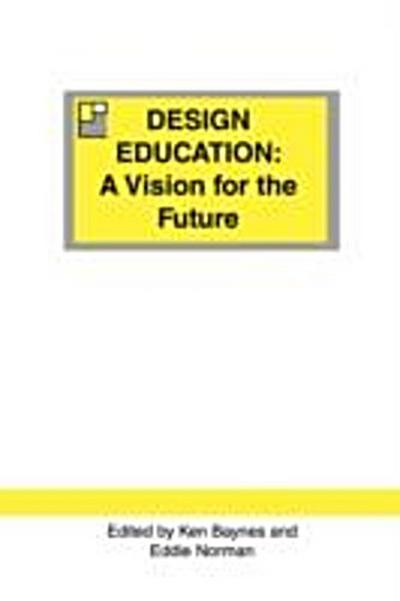 This short book is intended as an angry, but measured response to the Government's new National Curriculum proposals for Design and Technology and Art and Design in England. However its scope is much wider than national or 'subject' boundaries, as it is written from the standpoint of Design Education. The new curriculum proposals are frankly astonishing. They are a tired re-hash of old-fashioned approaches and ideas. How such a document came to be written is hard to understand but the result is not recognizable either as current good practice, or as the views of any of the organizations who might have been consulted for informed and authoritative proposals.There is little to be gained by Loughborough Design Press joining in the chorus of criticism that will certainly be directed at this folly. We support the criticism of course, but also believe the time has come to put forward a more relevant vision of the future. This book provides the starting points for such a vision. The book is structured round the 2010 John Eggleston Memorial Lecture given by Ken Baynes at the Design and Technology Association Education and International Research Conference at Keele University. The lecture was entitled 'Models of Change: The future of design education' and proposed seven key themes around which a future vision of design education could be framed. In this book, we have invited leading academics in the design education field to develop the discussion further: The aims of design education Phil Roberts The significance of practical education Eddie Norman & Ken Baynes Encouraging the imagination Stephanie Atkinson The cognitive value of aesthetic awareness Krysia Brochocka & Ken Baynes The value of learning through making Gill Hope The creative relationships between designing and making Niall Seery & Eddie Norman The educational purpose of doing design projects Eileen Adams

How do designers do what they do? How do architects, engineers, industrial, fashion and graphic designers think? What is it that goes on in their minds that enables them to shape the things that people buy, use and inhabit?  And how far do they share their mental abilities with people at large? Is it true that everyone is a designer in their own way? In Models of Change, Ken Baynes draws on a lifetime’s research and experience to suggest answers to these questions. He uses the latest findings from neuroscience and evolutionary biology but also traces the story of designerly thinking back to the early days of homo sapiens sapiens and such momentous changes as the invention of cooking, the Enlightenment and the industrial revolution.  Designerly thinking proceeds through the construction of causal models in the mind and understanding the implications of this process for design decision-making is  crucial to the survival of our species.